Comic character from the 90s who resembled Spawn

This one has been annoying me for a while now, I just cannot recall what the name of this guy/comic was.

Was an origin story about a guy who finds a costume that looks a bit like Spawn and gives him the standard super strength/flying powers, etc, I vaguely remember it being in the back of another more established comic, can't remember which one, we're talking early to mid 1990s here. He was more of an anti-hero than hero, I remember he used to throw these bombs that looked like pills as well. No idea if it was Marvel/DC or whatever.

His main enemy in the story was this guy who looked a bit like Duke Nuke'em. Spiked blonde hair, dressed in black, was a commando/army type guy. His catchphrase was something like 'If I see it coming, it can't hurt me'.

Two scenes I specifically remember in the comic are when bad guy is beating the crap out of good guy in a club. Good guy doesn't have his costume on so no super powers, a couple of bouncers get involved and bad guy turns around in a rage tearing half his suit off, which allows good guy to escape.

Later on good guy revisits bad guy, this time wearing the suit. He flies up to like the 80th floor of a building and starts kicking the bad guys ass. He throws him out of a window and the bad guy falls to his death...except he isn't dead yet, badly hurt, but not dead. He's crawling out of a hole, smashed to bits, repeating his catchphrase - 'if I see it coming, it can't hurt me'. Last panel is the good guy hitting him from behind with a truck, which he doesn't see coming, which presumably does kills him.

Anyone remember the name of this character? Comic? 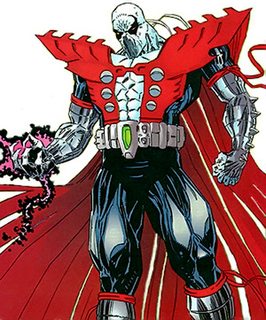 Chase Lawler was a musician who summoned the Wild Huntsman to save himself and his girlfriend from harm. He did not understand the commitment he was making to the Wild Huntsman and found himself compelled to hunt the lonely. He tried to resist the urge by hunting villains, with limited success. Lawler suffered a heart attack and Mark Shaw attempted to resuscitate him. This transferred the bond with the Wild Huntsman and the compulsion to hunt to Shaw. It was later revealed that Lawler had undergone the same mental programming as Mark Shaw and that the Wild Huntsman was actually an illusion created as a side effect. Lawler was drugged and then murdered by Shaw, who had fallen back into his Dumas persona.

One of the villains he battled was Scarth. 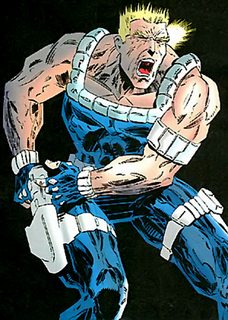 Employed as a field agent for the Necrodyne Corporation, Scarth came into conflict with Chase Lawler while investigating Lawler’s recent adoption of the Manhunter persona. Scarth and Manhunter fought several times, with Manhunter ultimately prevailing each time.

Necrodyne’s final attempt at subverting Manhunter pitted the hero against a cyborg built with Lawler’s brother’s corpse. Scarth teamed up with Manhunter to defeat the monstrosity, knowing that the cybernetic creature’s success against Manhunter would likely end with it replacing Scarth at Necrodyne.

After defeating the bionic revenant, Scarth tried to take down Manhunter one last time. Manhunter blinded Scarth, completely depriving him of his superhuman durability, and then thrashed Scarth badly in a near-homicidal rage. The fight ended with Scarth curled up in a fetal ball begging Lawler not to kill him. Lawler agreed so long as Scarth never crossed his path again.

Your quote is close to verbatim:

(Giving a lecture while in the middle of a fight) “Your problem is, you got the wrong attitude. Think it’s muscles ? A scary look ? Fighting’s all in the mind. Me, I see it coming and it can’t hurt me. Nothing can. It’s great. All in the mind.”

I found Scarth by searching for comic "see it coming" "it can't hurt me" after the exact quote failed.

Is it possible you're of Nightwatch, aka Dr. Kevin Trench? 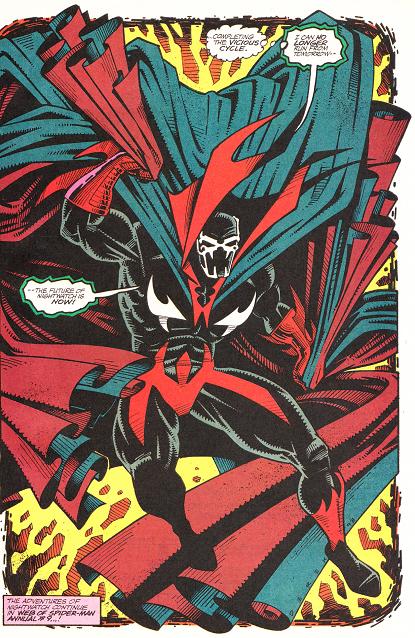 Nightwatch was Doctor Kevin Trench, who witnessed a costumed man die battling some terrorists armed with invisibility-generating 'cloaking" devices, and unmasked the corpse to learn that it was an older version of himself.

Freaking out, Trench stripped the costume from "his" body and fled to a deserted island, reasoning that if he just never wore the suit or went home, he wouldn't die. Events conspired to bring him back, as the criminal Alfredo stole one of the costume gloves after washing up on the island and being nursed to health by Trench. After Alfredo had been dealt with, Trench decided that he couldn't avoid his destiny, and decided to investigate the costume's origins.

In the interim, he battled menaces like the "Maximum Carnage" gang, who were wreaking havoc across New York and slaughtering dozens of innocent civillains. He had many allies in the fight, including, but not limited to, Captain America, Black Cat, Deathlok and Firestar. He also fought the mutated Deathmask. Graduating into his own book, Nightwatch encountered similar "cloaked" villains, and was shocked when their technology merged with and enhanced his costume. In between battling menaces like Flashpoint, Cardiac (whose technology had been stolen to create the more vicious Cardiaxe), and Venom, Nightwatch discovered that an old ex-girlfriend was working for the shady Morelle Pharmaceuticals on a nanotech project.

Ultimately, project head Phillip Morelle proved to be recklessly conducting nanotech experiments to make a replacement skin for his dying son Justin. Nightwatch fought his way onto Phillip Morelle's space station to confront him but not before Phillip sends two assassins into the past to kill Nightwatch using his nanotechnology to open a time portal. Much to both Nightwatch and Phillips surprise that same time technology allows a future version of Justin Morelle to travel into the present. Future Justin, armed with a more advanced version of Nightwatch's own suit, kills his father and reveals that the nanotechnology his father was developing produced a dangerously unstable energy matrix that in his time line devastated North America killing billions. Justin upgraded Nightwatch's armor to its final evolution and the two of them worked together to destroy the space station before the disaster could happen. In the epilogue present day Justin Morelle, the son of Phillip and Trench's ex, received the nanotech skin from the project as his father had dreamed. Seeing his ex happy with her healed son Nightwatch chose to travel into the past and complete the time loop with Cardiac's help, ensuring his own death but also ensuring the cataclysm timeline would never come to pass ensuring this happy ending would be the true timeline. The series ends with Kevin's trip into the past while future Justin's fate remains unclear.

He definitely resembles Spawn (I found him via a search for comic book hero looks like spawn), although I haven't found the villain you're thinking of.

7
Which comic book super villain was the first to match wits against a different super hero?
9
Identify the sci-fi movie based on Max Steel character
10
Space cartoon from the 80s or 90s
8
Comic with superteam; electric woman, guy who can make things with his mind and a glowing 'wolverine guy' who can fly
5
Mid-80s comic that resembled French comics with a character likely named "Rodion"
7
Trying to track down a bizarre superhero comic involving gifted children who reunite in adulthood at their father's funeral
8
70s-80s DC comic in which a demon devours a man in a Superman costume
5
Marvel Comics villain from the 60s/70s who was essentially a walking chemistry set?
26
Futuristic Cartoon from 80s-90s