One thing I've noticed in Star Wars is that all spaceships always seem to acknowledge a universal "up," in that when two ships come out of hyperspace they are both the "right" way up, even if they are from the opposite side of the galaxy. Is this just an error? Or is there a reason in either Legends or Canon for this?

And if this is an error, are there any instances of two ships meeting at a battle, one facing "up" and on facing "down" in (for example) Legends?

The first example that springs to mind is the climactic battle of the Legends novel The Bacta War, where the ISD Freedom attacks the SSD Lusankya from above at a 90-degree relative roll (so that Freedom's side is pointed at Lusankya's top). I don't recall if it exited hyperspace in that position, though, or merely maneuvered there during the battle.

In the main though, especially in visual media (films, animation, video games) it's just a convention. It helps avoid disorienting the audience when we're meant to be focusing on a few ships. When there are larger numbers (as in the battle at the start of RotS) or in other media (prose, comics) ships tend to be every which way.

I have one example from the original trilogy where this is not the case.

In episode 5 when the Falcon hides on the Star Destroyer it clearly has a different up.

Not sure if this image is actually from the movie. But it shows the Falcon on the side of the "bridge". 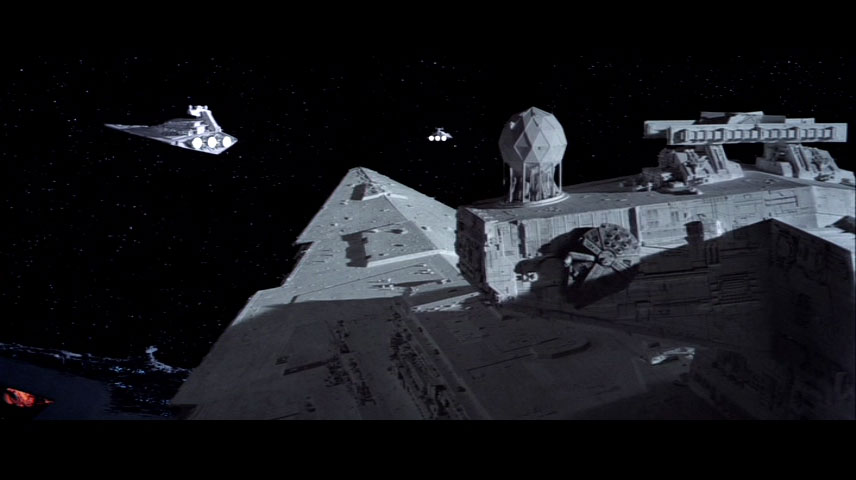 I agree that this is probably just due to film maker convention rather than a reflection to in-universe philosphy. But if I may speculate in a possible rationale for in-universe:

It could be that it's a galaxy wide convention to always align with the galactic north pole as "up" in order to make it easier to quickly adjust navigation. The Star Wars universe does run on a very diffuse level of technology after all (computers at the same time being sentient as exemplified the androids and very low tech as shown by the ridiculous data retrieval system used in Rouge One) and navigating hyperspace does seem to have some manual steps in it. Reducing the complexity by fixing position along the Z-axis may make those steps easier for the humanoid mind to comprehend.

It is possible that ships make themselves level with the galactic plane. This would provide a plane they can all detect and align themselves with, no matter where in the galaxy they are.This could be for navigation. It's easier to coordinate movement such as formations and evasive action between ships if they can agree which way is "up". Maps are easier to think about if you don't have to account for whether your ship is sideways. Another reason they might choose to do this is that their ships have windows. If you look out and see other ships seeming to face another way "up", you might start to feel like what your eyes are seeing isn't matching up with what your inner ears are feeling (the direction of artificial gravity-pull on your ship) and that is the classic setup for sea-sickness.

The out-of-universe explanation is of course so the audience can follow what is going on without getting confused or dizzy. Also the battles in Star Wars are based on WW2 naval battles (Lucas even used WW2 footage as placeholder clips in the rough-cut) and those have an established plane: the ocean.

Not the answer you're looking for? Browse other questions tagged star-wars star-wars-legends spaceship hyperspace or ask your own question.

1
Is it known if there are non-Interdictor tactics to stop ships in hyperspace?
35
What allows Star Wars ships to slow down?
16
In Star Wars, are protocol droids like C-3PO water-resistant?
7
Is there any evidence in Canon for how long specific hyperspace trips actually take in the Star Wars galaxy?
4
Is this is the only instance in Star Wars of two craft docking while in hyperspace?