What are Squirrel Girl's 'actual' stats? Is she truly the most powerful being in the Marvel universe?

On the Marvel Universe Wiki ("The Definitive online source for Marvel super hero bios") Squirrel Girl is listed as having the maximum stats in her power grid.

However in the Official Marvel Handbook (2002 - Avengers Edition) ("Comprehensive and exhaustive") she's listed as having lower stats.

Which one is correct and why is there a discrepancy?

Squirrel Girl's incredible power and ability started as a running joke in Dan Slott's Great Lake Avengers books - we were presented with a series of aftermaths of staggering battles, including one where she defeats Thanos, and The Watcher even shows up to verify that it's totally the real Thanos. 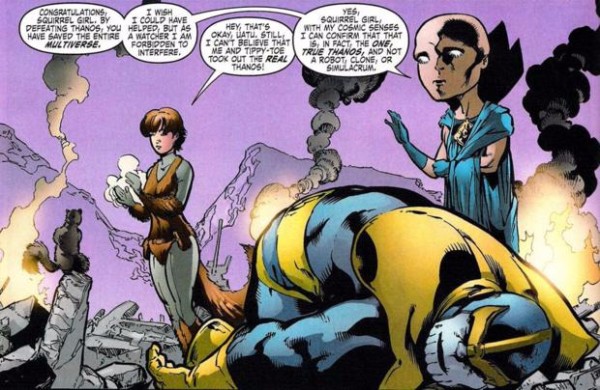 This all springs from the fact that in Squirrel Girl's first appearance (written by Will Murray and drawn by Steve Freakin' Ditko) she defeated Doctor Doom. It's an in-canon story, and it's been cemented in continuity that it was the REAL Doom, not a Doombot, or any of the narrative "outs" that had been used in the past to explain away losses by powerful characters 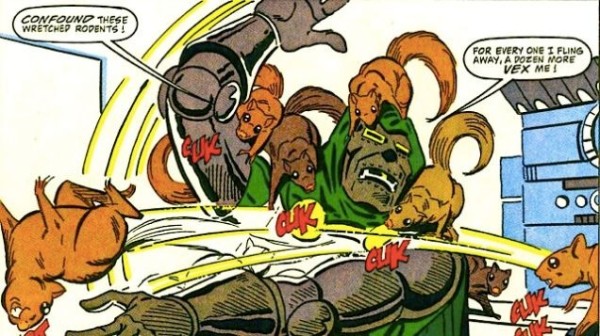 Slott's use of the character gave her quite the push, and when she started showing up in Avengers, she became an "A-Level" hero. Now she's got her own book, and will be appaearing in the New Warriors show, played by Milana Vayntrub, AKA Lily from AT&T.

Is she REALLY all that powerful and "unbeatable"? Probably not. Is she undeniably awesome? You bet your nut-sack.

Squirrel Girl's stats on the Marvel Wiki are not considered to be canon. As with all entries on that site they were written by fans rather than being a curated collection of facts written by Marvel staff.

In this case, her article and stats were written by a comic-book fan named Kyle Nichols (aka Mimicx35). He's contributed to multiple articles but I see no evidence that he has any special relationship with Marvel other than being a keen reader of comics and running several now-defunct comic chatrooms on MSN in the 1990s. A Marvel staffer did stop by to make a cosmetic change to her article (adding a better quality photo) but that's about it.

Her actual stats, as seen in the Official Marvel Handbook of the Universe - Avengers 2005 edition are those that are considered to be canonically valid and, crucially, actually fit with what we actually see her doing in the comics. 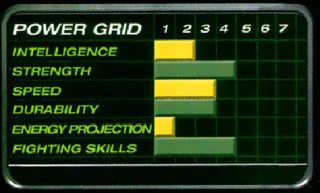 These are replicated in a later edition, the 2008 Official Handbook of the Marvel Universe A-Z (2008) where she is described as a "surprisingly fierce and formidable unarmed combatant". 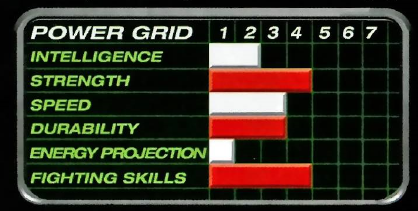 And again in the Women of Marvel: Celebrating Seven Decades handbook (2010).

along with a brief description of her strength and agility

If I had a Marvel wiki login, I'd edit these into her article.

Squirrel Girl's stats from IGN's Marvel Heroes role-playing game seems to agree with the Official Marvel Handbook (though using a somewhat different scale), indicating that the OMH has the right stats.

0
Is Squirrel Girl's “power” intentionally over-exaggerated, like One-Punch Man?
31
Does Squirrel Girl have maxed power stats on the Marvel Wiki?
25
How did Squirrel Girl defeat Dr Doom?
5
Is there an in-universe reason for why Squirrel Girl is so powerful?
2
Has the Marvel power grid been completely removed from their website? I cannot find it anywhere

19
What are the various fictional metals in the Marvel Universe?
50
What Marvel Superhero or Supervillain Has the Most Secret Identity?
31
Does Squirrel Girl have maxed power stats on the Marvel Wiki?
2
Are the Marvel Netflix series set in the Marvel Cinematic Universe?