Was Bender programmed to be evil?

The character Bender Rodriguez in Futurama is a robot. He was built and programmed by Mom Corp. When he popped off the assembly line, was he programmed to be evil (i.e. his adorably greedy, misanthropic self), or was this something that he learned/picked up from his experiences? Essentially, how does nature vs. nurture work for robots? Is it all preset in them from creation, or do they have free will or a learning capability?

Yes the pilot does explain most of the "why" of Bender. But if you remember, when Leela is in the robot wax museum, she puts on goggles that see through the eyes of a bending unit. She sees all people as "theft targets," so maybe he was built a little evil. ;-)

Bender is kind of an exceptional robot, because of what happened to him when he fist met Fry. Remember the Space Pilot 3000?

They are trapped in some sort of closet in the head museum with several heads of criminals in jars. Fry asks Bender to bend the bars that are blocking their path to escape and he answers that this would be against the law and therefore against his programming, as he is only programmed to bend for constructive purposes. It is reasonable to assume similar restrictions apply to most MOM-robots. 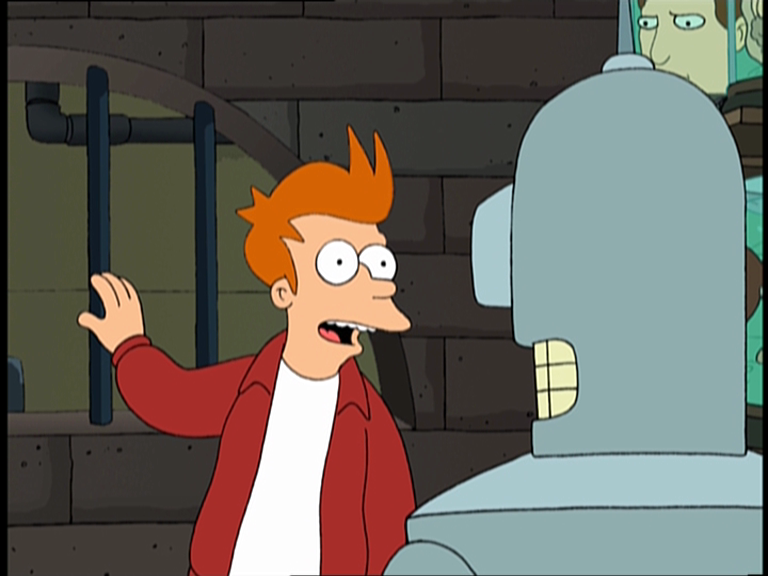 However, he accidentally walks right into a light bulb with his antenna and breaks the glass casing, 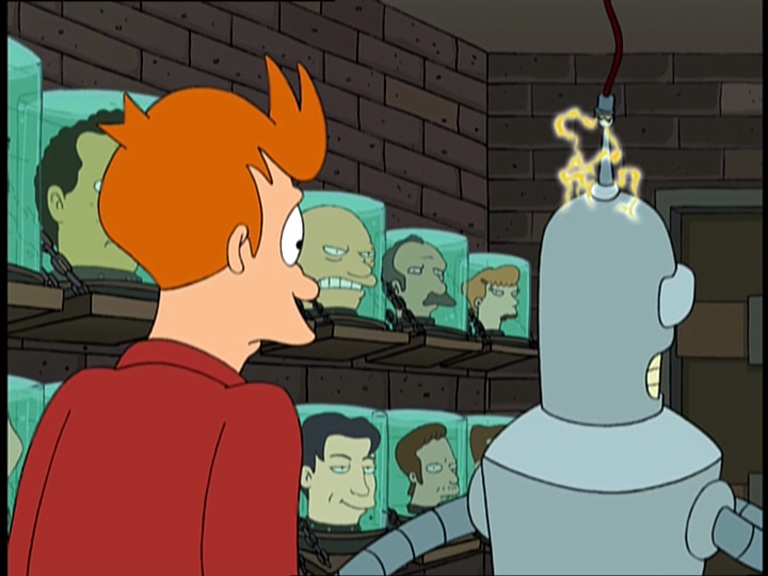 causing him to be exposed to the electric current that presumably flows through the bulb, also presumably frying some of his morality circuits (non-canon wording). This incident is what allows Bender to develop his personality. 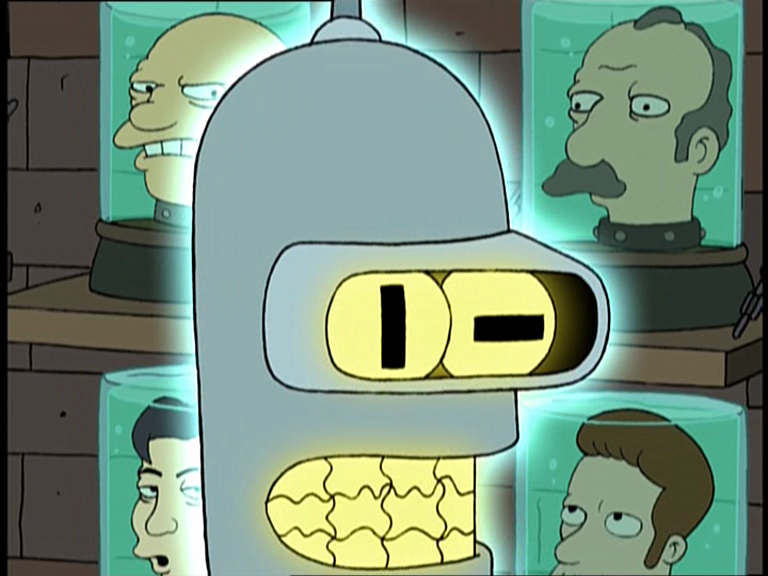 Bender was simply matching his surrounding when he rebooted.

As later confirmed in Season 3, Episode 5, The Birdbot of Ice-Catraz, Bender is attacked by an orca and due to the damages shuts down. When he reboots he adapts to his surrounding by going into "penguin mode" and begins to fully act like a penguin.

It takes another traumatic event (Leela shoots him in the head) for his programming to reset again which this time he sees Leela first and so reboots into "human mode".

By taking this logic back to the pilot episode Bender is merely adapting to his surrounding and by being surrounded by criminals reboots accordingly.

He was programmed to be awesome!

Haven't you heard? Bender is great! He drinks beer, he's funny, he makes lewd jokes and he's the only character with his own set of catch phrases.

"I'm the greatest!", "Bender is great!" and all the other times that he tries to convince everyone else about how awesome he is.

As a side thought, you can't really term some programmed device as evil - evil is just a glorified perspective, depending on which side of the fence you sit on, your moral tendencies and how you interpret life. Besides, the complexity attached to a robot would imply that those interpretations may differ for an intelligence formed from a logical basis (basically whats evil for you and me, may not be for a robot or some abstract form of intelligence). The best argument that you get away with is that Bender is chaotic or has some rather abstracted social tendencies - particularly for material wealth.

Realistically speaking (as far as possible in this context anyway), if you were to mass produce Robots to integrate into society, they would need to conform to the tendencies and norms of society in a non-intrusive and non-destructive manner. That would immediately imply that Bender is not your run-of-the-mill robot and is possibly defective or altered in some way (as Bender continuously breaks the norms of society). However, we see Bender learning, and as a hardware robot produced by MOM-Corp, this would imply that similar models would have similar abilities to learn (as far as I know Bender's only defect is the whole wireless update thing). So ultimately, no, I don't think Bender was pre-programmed to be greedy, misanthropic self, yes, these robots clearly have an ability to learn, but they all would hypothetically start with the same set of moral presets.

I think Bender is just chaotic to the max (maybe thats what happened when the lightbulb fried his circuitry or whatever - he lost some of his control laws).

Fact of the matter is, he still comes to the aid of his friends when they're in trouble, still works for planet express, seems to care deeply for Fry and ultimately seems to have some form of conscience.

As for this whole nature vs nurture thing, I'm sure thats open to interpretation. Bender and the other robots seem pretty intelligent and I'm sure that they conform to some base instincts, same as we would. Arguably, those instincts would differ from human's but may be based on humanity's primal prerogatives (as the robots tend to be of a humanoid form). Who knows? It could go either way, and I don't think there's much evidence to support either side.

Is Bender evil? Good? Don't know, not sure if a good deed cancels out an evil one.

Well, as seen in pretty much all the roots in the show, they each have their own personality. It's very likely that like humans, they are created to each be unique in the way they think. But, as shown above, they are restricted to do certain things, and Bender being shocked changed his programming. Bender has always been at least a little evil. This is clearly shown in the first episode when he tries to con the suicide booth. Also, the fact that he went to commit suicide shows that he has free will as I doubt he was programmed to kill himself.

Yes, but not a evil evil. More like a minor evil. It was somewhat revealed in the episode where viewers met Bender's look-a-like. The look-a-like turned out to be the good one of the two.

16
What happened to the bomb in Bender?
15
How old is Bender?
20
What is Bender made of?
9
Why doesn't Bender go on killing sprees more often?
10
Are there more bending units named Bender?
7
Was Bender originally a slave?
8
Why does Bender need to sleep?
14
Does Bender ever kill a human?