How relevant are gestural components for Doctor Strange's magic?

In both Doctor Strange and Avengers: Infinity War, restricting a wizard's movements (using the Crimson Bands of Cyttorak, for example) has been the primary mean to keep them from casting any spells.

However, we see in Doctor Strange a specific wizard (Master Hamir) who can make magic with a missing hand. Hell, the movie's whole plot revolves around Strange understanding that he does not need to execute the moves perfectly, but simply believe in himself to cast magic.

It does not seem odd to me to suppose that one could make magic without hands at all, defeating all purpose in immobilizing a wizard. Yet, it works.

So, are gestural components really necessary for any wizard to make magic? Is there really any use in immobilizing a wizard?

I don't really expect to find a concrete answer to this in the MCU, so I will be accepting answers from the comics.

The MCU is a distinct universe from the comics, but draws abundantly from them.

Dr. Strange was created by Stan Lee and Steve Ditko. The latter's influences and sources of inspiration are the key to answer your question. Ditko wished to create a mystical character based on a mix of eastern esoteric and religious traditions.

For example, the Eye of Agamotto is strongly linked to the Snail Martys charm and amulet of Buddhism, especially in Nepali traditions. The fact that Strange and other dabblers in the occult often conjure powers from both good and evil sources, and use both black and white magic, is a display of influence from Taoism. And most explicitly, the setting where Strange first learns magic is Tibetan.

One traditional eastern practice that Ditko incorporated into the comics was the usage of mudras. From Wikipedia:

A mudra (muˈdrɑ); Sanskrit "seal", "mark", or "gesture"; Tibetan: ཕྱག་རྒྱ་, THL: chakgya) is a symbolic or ritual gesture in Hinduism and Buddhism. While some mudras involve the entire body, most are performed with the hands and fingers. A mudrā is a spiritual gesture and an energetic seal of authenticity employed in the iconography and spiritual practice of Indian religions.

The mudra most associated with Dr. Strange is the karana mudra: 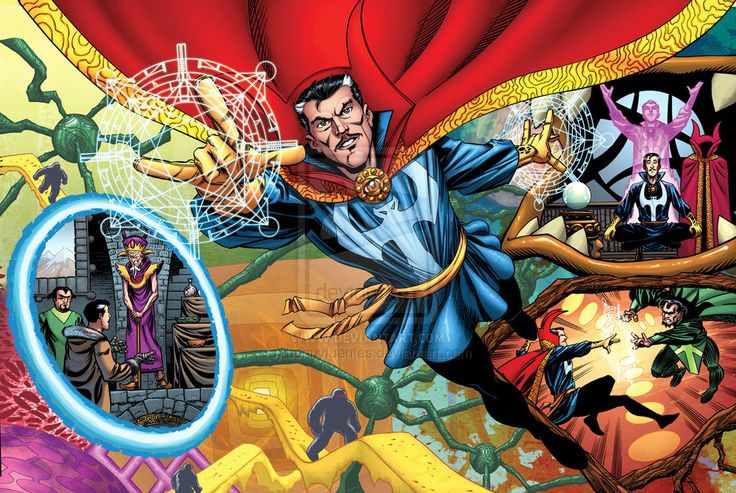 The karana mudrā is the mudra which expels demons and removes obstacles such as sickness or negative thoughts.

This resounds with the powers of the Eye of Agamotto, which can dispel evil magic and reveal paths. Dr. Strange is also mostly immune to common diseases due to a mix of reasons.

It is made by raising the index and the little finger, and folding the other fingers. It is nearly the same as the Western "sign of the horns", the difference is that in the Karana mudra the thumb does not hold down the middle and ring finger.

He can often be seen using other gestures, for different effects. This has to do with different mudras having different meanings and purposes. 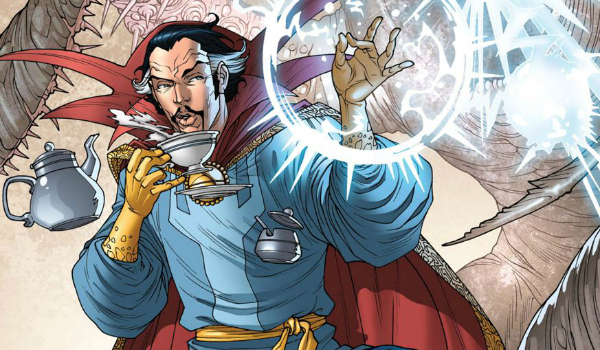 Since mudras have power of their own, we can imagine that they are as much a part of a spell or incantation as are words, thoughts, and material components. In some way, removing a mudra from a spell or replacing it with another mudra would be like removing or replacing a part from a machine - whether the spell will work, and how different its effects will be, will vary from spell to spell and from mudra to mudra.

If you wish to learn more about Steve Ditko and/or meddle with powers not comprehensible to mortals, a good suggested read is The Lesser Book of the Vishanti, by Catherine Yronwode.

All I have said above explains the usage of mudras for the comics... In the MCU, their usage is never elaborated, and it is quite possible that things will stay like that. In cinema, things such as hand gestures for magicians are supported mostly by the Rule of Cool, and screen time is precious - so there is more pressure to leave it at that than to include exposition should we ever have a second Dr. Strange movie.

The gestures used by Doctor Strange and the rest of the Sorcerers are extremely relevant to the magic they perform. In fact the whole system was designed around these gestures as Doctor Strange director, Scott Derrickson, explains in the below interview:

How did you come up with the very specific spell choreography, with all that hand and finger work?

The starting point for it was wanting to get away from the verbal spells. I think that magic tends to be something where you cast a spell and then the camera sits back and you watch something happen, and I didn’t want it to be that. I wanted it to be in the action, I wanted it to be more organic, and that seemed to lead me to this idea that magic is about movements and gestures. So I think it was Stephen Broussard, my point producer who brought me a YouTube video of Julian, who goes by J Funk, who’s one of the world’s best tutters. He does these amazing things with his fingers — go look him up on YouTube. We hired him to do all the choreography, so he taught Tilda and Benedict and Mads. It’s very specific and very deliberate and super-cool. In fact, he’s in the movie. He’s the very first guy in the opening scene, who forms the magic whip.

I kind of want to watch the version that has all that choreography and none of the effects.

On top of that The Road To Marvel's Avengers Endgame - The Art Of The Marvel also has a brief section on Strange's hand gestures when designing them for Doctor Strange.

"We knew Doctor Strange's hand gestures were going to be important," Jackson Sze says. "This is actually part of a series of images in which he unlocks the Eye of Agamotto using hand signs, emphasizing that gesture will be important to this character."

The Road To Marvel's Avengers Endgame - The Art Of The Marvel 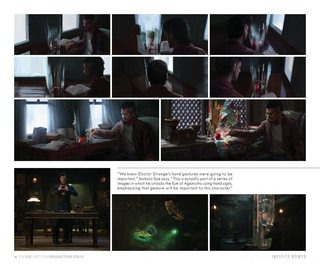 There are two parts of your question as to why you feel like hand gestures aren't important I will address those below but they are essentially the same. As a general rule though we see in Doctor Strange, Avegers: Infinity War and Avengers: Endgame that the Sorcerers all use the same hand gestures when doing spells meaning they are important.

Note whilst Master Hamir doesn't have hands he is still making gestures, perhaps, maybe even in a different dimension, he is also making those gestures with his "hands". It is focusing on the movement, believing you can do it, that means you can. The point is that Strange needs to surrender himself to the magic and "forget everything he thinks he knows". That is what The Ancient One is trying to get through to him, it's just that by focusing on his issue with his hands is the best avenue to do that.

The Ancient One: It’s not about your hands.

Doctor Strange: How is this not about my hands?

The Ancient One: Master Hamir. Thank you, Master Hamir. You cannot beat a river into submission. You have to surrender to its current, and use its power as your own.

Doctor Strange: I... I control it by surrendering control? That doesn’t make any sense.

The Ancient One: Not everything does. Not everything has to. Your intellect has taken you far in life. But it will take you no further. Surrender, Stephen. Silence your ego and your power will rise. Come with me.

One standard explanation for this sort of thing which has been seen in multiple media, and not with just comic book characters, is that gestures or using a different language to cast spells acts as a way of concentrating. Think of it like the warm up swings a baseball batter or golfer makes; they don't need to do it, but it focuses the mind so they're ready to do it, and if it's interrupted it knocks them out of the zone.

The other rationale is that having to perform a small ritual and/or use certain language acts as a safety measure; the magician won't accidentally unleash a fireball by flipping someone the bird or making an idle comment.

As a magician becomes more skilled, they do it out of habit, but they're fully capable of not having to do it if they don't really, such as a skilled batter who for intimidation comes to the plate, assumes a hitting stance, and just stares down a pitcher waiting for the throw.

This was addressed early in Doctor Strange's history—in Strange Tales no. 142. The answer was that finger gestures are needed for some, but not all, magical powers.

Doctor Strange is captured by agents of Baron Mordo and knocked unconscious. When he awakens, he is bound, both physically and magically. Several measures have been taken to prevent him from using various kinds of magic: his artifacts have been taken away; his head is bound, so that he cannot speak spells or enter ectoplasmic form; and his hands are bound, so that he cannot use them for spell casting.

However, even with all these restrictions, Strange does still have at least one magical avenue open to him. He can use telepathy without moving his mouth or his hands; and while he is initially unable to call for help from the Ancient One, his telepathic powers do enable him to overcome one of his captors.

As he works his way more free over this issue and the next one, Strange gradually gets back access to his powers. Once his mouth and hands are free, he is able to totally dominate the enemies, and it appears that it is his hands that play the key role in wiping their minds of all knowledge of dark magic. 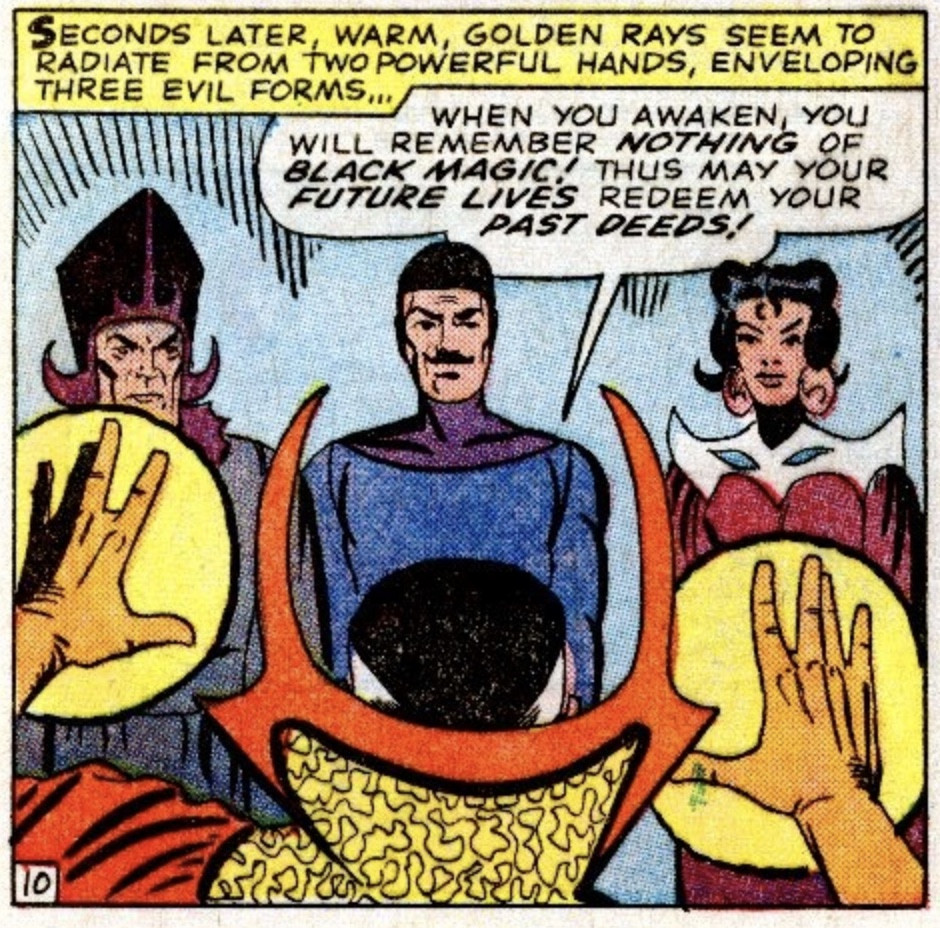 Not the answer you're looking for? Browse other questions tagged marvel marvel-cinematic-universe doctor-strange or ask your own question.