SCIFI Series. Humans can do point to point interstellar jumps but a supernova kills network

Looking for this two or three book series I read as a youth.

Background: Humans found a way to point to point transfer in the galaxy due to force lines. Humans colonized a few systems. Lines of force changed when a local star went nova stranding the colonies.

Setting: Colonized world after the supernova.

Combined plot through series: Colony thinks it has found the re-aligned points in the point-to-point network and want to test it. Male protagonist must work with the female protagonist (named Bethany) who is the daughter of the last earth officer/ambassador/official in command of the orbiting jump ship. They are able to get it to work and are able to jump to a system where the colony has been wiped out by an attack(?). They are then able to determine that another jump point exists in this system and are able to jump to a third colony.

Here they surprise the humans who were not expecting these visitors. They are intercepted by royal forces (local colony has set up a monarchy) which are armed to the teeth. They find out that the new colony has been fighting against a species known as the hegemon/hegemony. The hegemony may have come in book one, I am unclear. Together the colonies determine that they can try to get to Earth because they have developed the necessary shield technology to use the jump point still somewhere in the local system that went Nova.

They eventually get to Earth where they find that the humans are fighting a losing battle against the larger and more equipped hegemony. The main protagonist realizes that the reason they are able to support such a war is that they have a larger jump network and have specialized means of production for items in specific locations then use the ease of transfer of their larger network of transfer nodes. He realized the only way to win are to take out the systems containing 'choke points' for the hegemony supply lines.

Some other things of note:

Part of the cultural/racial history of the Hegemony is that they see novas as a bad omen. In their distant past a nova caused hardship and death of young. The new nova in the story's timeline has the whole hegemony wanting to eradicate humanity as they are targets of the bad juju nova omen.

story-identification books
Share
Improve this question
edited May 5, 2018 at 19:37

Your description is an exact match for the first two novels in the series:

In Antares Dawn, the sudden, mysterious appearance of a devastated human warship near the human colony world Alta — a peaceful parliamentary democracy, long cut off from the rest of humanity due to the Antares supernova's disruption of hyperspace routes — leads to Alta making contact with another isolated human world. Sandar, a monarchy, is coping with severe overpopulation, a frigid climate, and a war for their very survival. The Altans help defend Sandar against an attack by the alien Ryall Hegemony. Two main characters are Captain Richard Drake, of the Altan starship Discovery, and Bethany Lindquist, the niece and representative of the hereditary terrestrial ambassador on Alta.

Antares Passage sees Alta and Sandar reconnect with Earth and the rest of human civilization by way of the radiation-strewn Antares supernova nebula. Along the way, the humans capture a Ryall administrator — someone more open to philosophical discussions than the usual military caste prisoners — and acquire a map of Ryall faster-than-light fold routes. Captain Drake proposes a plan to blockade Ryall space at a critical choke point of the network.

You may not yet have read Antares Victory, since it was published much later than the first two novels. It develops two plot threads (no spoilers here) from the second novel: the implementation of Drake's plan, and the resulting complications as the two species learn more about each other. 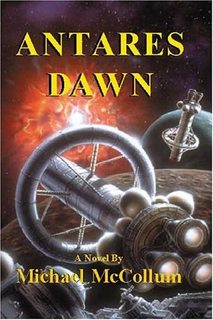 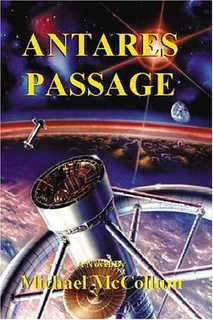 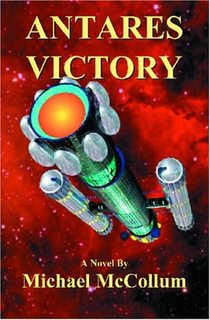 An awful lot of this sounds like the CoDominium series, mostly by Jerry Pournelle, but sometimes with coauthors (most notably Larry Niven for the "Motie" novels, in which some very strange and often hostile aliens are invovled). Faster-than-light travel is achieved via the Alderson drive which instantaneously warps ships along paths from the vicinity of one star to another. The birth or death of a star (e.g. via supernova) will change the network of paths, opening new ones or closing off existing routes. The majority of human-colonized worlds are eventually united under an empire based on the planet Sparta, sometimes referred to as the "Spartan Hegemony."

12
Remote vacation planet and an interstellar war
4
90's sci-fi book series, humanity is attacked by aliens, point of view switches between the humans' and the aliens' between books

22
Novel(s) based on humanity fleeing from Earth and regressing to a pre-industrial state on a Colony so as to escape detection
8
90s (or earlier) book: humanity split between 3 factions (China, America, Russia) which colonized space, and have telepaths/telekinetics individuals
6
A Story About Bad Galactic Bureaucracy
15
Story about terrorists that destroy wormhole and leave planetary system isolated from rest of galaxy
14
90s (or earlier) novel: on a cut off colony after FTL travel wipes out life and becomes impossible, an emissary woman starts a college
6
Book series I read a few years back with a Marine doing a combat jump onto a planet
7
Book series: Space Navy based Space Opera, several alien species warring for generations
32
American astronaut abducted from moon, placed in alien zoo, must work with time-traveling Roman soldier