In 1983* (while I was at university in Sheffield) I saw this book in a secondhand store but didn't have enough spare cash to buy it. It was an occult conspiracy thriller but written in part as a pastiche of Sax Rohmer's Fu-Manchu books. It involved the Spear of Longinus and may have had 'Golden', 'Spear' or 'Golden Spear' in the title.

At the time (80s) it seemed a fairly new printing and it was in standard paperback.

*It was definitely 1983 as Terry Pratchett's first discworld book was just out.

Positively identified below as Richard Jaccomo's The Yellow Peril. Amazon.co.uk confirms there was a 1980 edition which would have been the one I saw. A (disparaging) review on Amazon also confirms that the Spear of Destiny appears in the novel.

Another possible candidate is Yellow Peril: The Adventures of Sir John Weymouth-Smythe, published in 1978.

The only synopsis I can find is an Amazon review, although they do mention a search for the Spear of Destiny:

Forget the "Fu-Manchu" stuff. I love reading about the Nazi characters in this book set in the mid-late 1930s. Just as Smythe tries to conceal his identity, so do the Germans. They consist of a middle-aged university professor and his oversexed sister Clara, traveling the Indian outbacks with a couple of thinly-diguised bodyguards (obviously SA thugs in civilian clothes). Outwardly, they are searching for ancient artifacts, but are actually on a quest for the "Heilige Lanze" (the fabled Spear of Destiny) on orders from the Fuhrer himself! Add to this the fact that the Nazi brother-sister duo are into private occult rituals featuring Aryan symbols painted on their nude bodies, knives, sex and human sacrifice and you've got Big Time Show Biz as far as I'm concerned. :-)

It was billed as a Fu Manchu pastiche which is what led me to the Amazon review.

There are surprisingly few books on ISFDB that contain the word "spear" (and not Shakespeare). Looking at the list for those published before 1983 gave one good candidate. The Spear by James Herbert was first published in 1978. However, the paperback was first available in 1981, so timing is about right.

The cover from that addition (according to ISFDB): 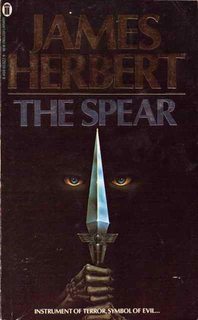 The blurb from Goodreads:

When Steadman agreed to investigate the disappearance of a young Mossad agent, he had no idea he would be drawn into a malevolent conspiracy of neo-Nazi cultists bent on unleashing an age-old unholy power on an unsuspecting world.

Not sure how much a pastiche it is, but this review seems to describe it as pretty crazy:

A fanatical arms dealer is intent on resurrecting Himmler using the spear that pierced Christ's side; he will then lead a new world order and purify the human race. Given that said arms dealer - Edward Gant - has no nose, it is unlikely he will smell the strong aroma of [BS] wafting from this idea. We are treated to a beautiful hermaphrodite, a rather excellent first meeting with Himmler's corpse, a bizarre crucifixion scene, and a couple of disturbing flashbacks to the war. As usual, the fight scenes are overlong and the sex scenes overdone; Herbert tends to pant like a 13 year old over a swimsuit catalogue. As usual, it's a highly enjoyable romp; a little (storm)trooper of a book.

The film The Mask of Fu Manchu (based on the 1932) feature the Devil Doctor attempting to retrieve the golden sword and mask of Genghis Khan. Any chance you're conflating that and the book you saw?

There are a number of pastiche and cameo appearances by Fu Manchu, many written based on Philip Jose Farmer's "Wold Newton Universe" which attempts to link the continuity of dozens of science fiction, pulp and man's adventure heroes. He's appeared in one of the Man from UNCLE novels, and in a Destroyer novel. this site may provide more insight for you, and perhaps ring a bell.