Book about protagonist, Cassia, taken on as a wizard's apprentice

I know the main character was Cassia. I think they called her Kiska or Ciska affectionately.

Her type of magic was shunned, but wizards were revered. She was taken on as an apprentice type by a head wizard type who eventually goes bad. She puts together pieces of knowledge to blend elements to travel distances and time. She eventually helped the king.

She had a son (Beya? Benya? Beyja?) and a love interest in the book. There was also a historical character named Marija Ohdani or Odahni?

This wasn't a best seller by any means as far as I remember, and I believe this was in the 90's but I'm not positive.

The book is probably The Spirit Gate by Maya Kaathryn Bohnhoff. 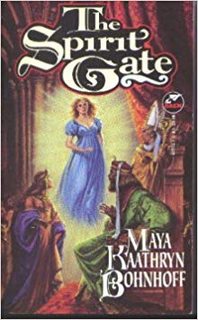 8
Identify a book and sequel about Mattias Hand, inventor and Prince who is exiled
5
Book about magician apprentice and stairway
16
Help Identifying a Sci-Fi Book: Humans transported to alien world and given tasks to escape
9
What science fiction novel was about a murder mystery, involving androids, psychics, and auras?
11
Childrens fantasy, blind monk leading boy who can control the elements
9
Book about an astronaut who is tasked with investigating the disappearance of a shuttle in the vicinity of a small forest planet
9
Book about a castle full of portals to other dimensions, everyone there has some magic
10
Novel where the main character pretends to be a princess