What is the current main source of power in Futurama?

What kind of power do the people of Futurama use currently?

In the film Bender's Game, Farnsworth rendered all dark matter inert with his anti-backwards crystal. After that, he "invented" a new source of power (Nibbler Power). But in later episodes, cars and ships still fly.

What energy is being used to power these vehicles? 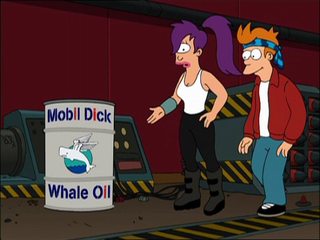 Leela and Fry get ready to top up.

After the collapse of Dark Matter, the crew turned to whale oil for fuel. It was revealed in 'Into the Wild Green Yonder' and has been used ever since.