Comic/Manga from early 2000's: thief-like guy with a snarky fairy companion, accompanied by a female mage and a tank

It's been a long time since I've read it, so the details are a bit hazy. There might have even been an anime, but I honestly can't say. What I remember most is the beginning of it, because it stuck out so much. Anyway. It's a swords and sorcery type story. Medieval tech level. Set entirely in a fantasy world (meaning I don't recognize any sites or anything from our world in it).

It starts off having the heroes facing off against the big bad. I think he was a lich-type with heavy-looking armour. And the big bad essentially kills them all off one by one, making the whole story seem like a 'life flashing before your eyes' type retelling.

The next thing you know, the main protagonist is under a tree with his fairy buzzing about, not more than a chapter before he meets the second member of the party.

I don't remember too much, other than this, because the opening was so unique that it stuck with me through the years. But if I recall correctly, the main protag was a thief-like guy with either a dagger or a short-ish sword, and the girl was I think a mage-type or a healer (light armour if not full on cloth). I believe there were two others. The tank and the mage, but I honestly don't remember anything about them.

The fairy was a bit sarcastic, too. I remember loving that one so bad. I think female, but honestly I was more interested in the snarky banter.

I'm itching to go back and read it (or watch it if there really was a show).

But that's basically all I remember. Or at least remember well enough that I am confident enough to say so. I've seen a LOT of shows and read a LOT of comics/manga since then, and I don't want to make people think it can't be 'that show' because 'this detail doesn't match'.

I am wondering if you are not looking for Saga, a comic that came out in 2012 which is basically told from the eyes of the child of two warring species.

The series is heavily influenced by Star Wars and is based on ideas Vaughan conceived both as a child and as a parent. It depicts a husband and wife, Alana and Marko, from long-warring extraterrestrial races, fleeing authorities from both sides of a galactic war as they struggle to care for their daughter, Hazel, who is born in the beginning of the series and who occasionally narrates the series as an unseen adult. 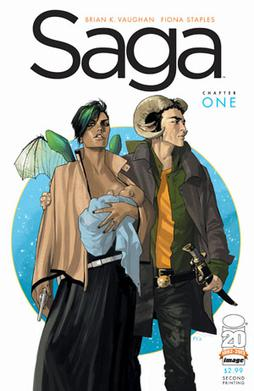 Not the answer you're looking for? Browse other questions tagged story-identification comics anime manga sword-and-sorcery or ask your own question.

18
Why do manga characters love to eat a lot of food?
6
Sci-fi comic from the 90s or 2000s; main character is a girl with white skin and black markings around her eyes
2
Identifying a sci-fi VR fighting comic
6
A martial art manga series about a samurai with animal's blood
17
Racy and lewd Sci-Fi comic from late 1990's/early 2000's with two girls, fighting?
7
Late '70s / early '80s Comic With Lizard and Woman in Wasteland?
5
Anime TV show with Elvis/Fonzie-like protagonist
5
Anime with fighting and magic weapons?
5
Manga (or Anime) where the protagonist is put in charge of a barren plot and grows a rare plant