What was the name of this TV show that involved time travel?

I have been looking for the name of a TV show I saw an episode of back in the late 90's or the early 2000's. It was about a boy and a girl (I think she was his sister) looking for his (their) dad. The episode I saw was set in either Rome or Greece (back in time), and there where people wearing togas.

I know this is not a lot to go on, but please help if you can.

If this picture looks familiar then 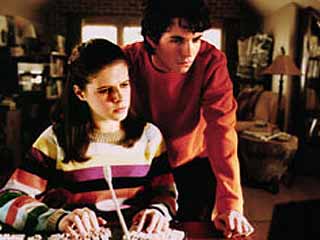 I believe it was MythQuest.

Matt Bellows scanned a strange and rare artifact, the Gorgos stone to add to his Cyber Museum. In doing so, the stone disappeared into the myth worlds and the evil God, Gorgos was released wanting revenge on the Gods that trapped him in the stone, by way of erasing and changing the myths. Matt entered the world of the myths to stop him. Matt's two teenage children, Alex and Cleo figured out what happened and are searching for their father. Each time they touch the Cyber Museum screen, they are taken directly into the myth and take on the persona of a person of that time, eg Orpheus. Together, they search for their father, learning more and more about the ancient myths, learning about themselves as well.

I'm not finding an exact match to what you're describing, but here's several that seem close: