In Westworld, why wouldn't they use an EMP (Electro Magnetic Pulse) device to knock out all the hosts in the park?

As per the title, why wouldn't there be any safety measures in place, such as an EMP (Electromagnetic Pulse) device, to knock out the hosts in case of an emergency?

Ignoring the question of whether Delos has the capacity to fire the sort of nuclear weapon or weapon-scale EMP that would be required for a park of that size (they don't), ignoring the damage that would be done to the assets in their other parks (considerable) and ignoring the potential side-effects on whatever's outside their parks (catastrophic), I suspect the simplest answer is that the hosts are likely to be relatively unaffected by an EMP.

The human body forms a pretty effective Faraday cage for enclosed electronics and the pulse strength would need to destroy embedded electronics has to be very considerable, well beyond what you could get from a typical airbursted nuclear weapon.

As we can see from the image below, their bodies are largely fake-organic material controlled by a computer core housed inside the brain-pan, surrounded by fake skull tissue, a fake brain and a secondary inner skull filled with fluid. Assuming the host tissue is roughly analogous to organic tissue, an EMP would be relatively ineffective at shutting down the electronic components unless it was very close indeed or ridiculously powerful. 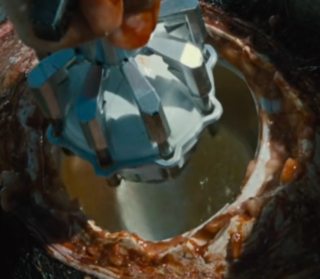 Not the answer you're looking for? Browse other questions tagged westworld-2016 westworld or ask your own question.

7
How do Westworld guests and hosts travel into the “park”?
7
Why would hosts in the Westworld control center not know this about themselves?