How did Spider-Man regain his secret identity after Civil War?

Spider-Man from Marvel comics reveals his secret identity in public during the events of Civil War. He is not the only one who did it; other examples are Iron Man, Wonder Man and Captain Marvel (Miss Marvel at the time), but I believe they didn't refute it.

Now Spider-Man definitely undid this somehow, seeing as he isn't known to the public to be Peter Parker at least from the "Superior Spider-Man" series onward. But how?

To clarify: I'm speaking about the comics, not the Marvel Cinematic Universe.

It was erased due to his deal with Mephisto in One More Day:

The woman in red transforms into the demon Mephisto, who tells Peter he can save Aunt May. As payment, Mephisto wants not Peter's soul, but his marriage to Mary Jane. Peter and Mary Jane are given until midnight the following night to decide their answer and, after several hours agonizing over the choice, they agree to the deal, as long as knowledge of Peter's secret identity is erased from the world. 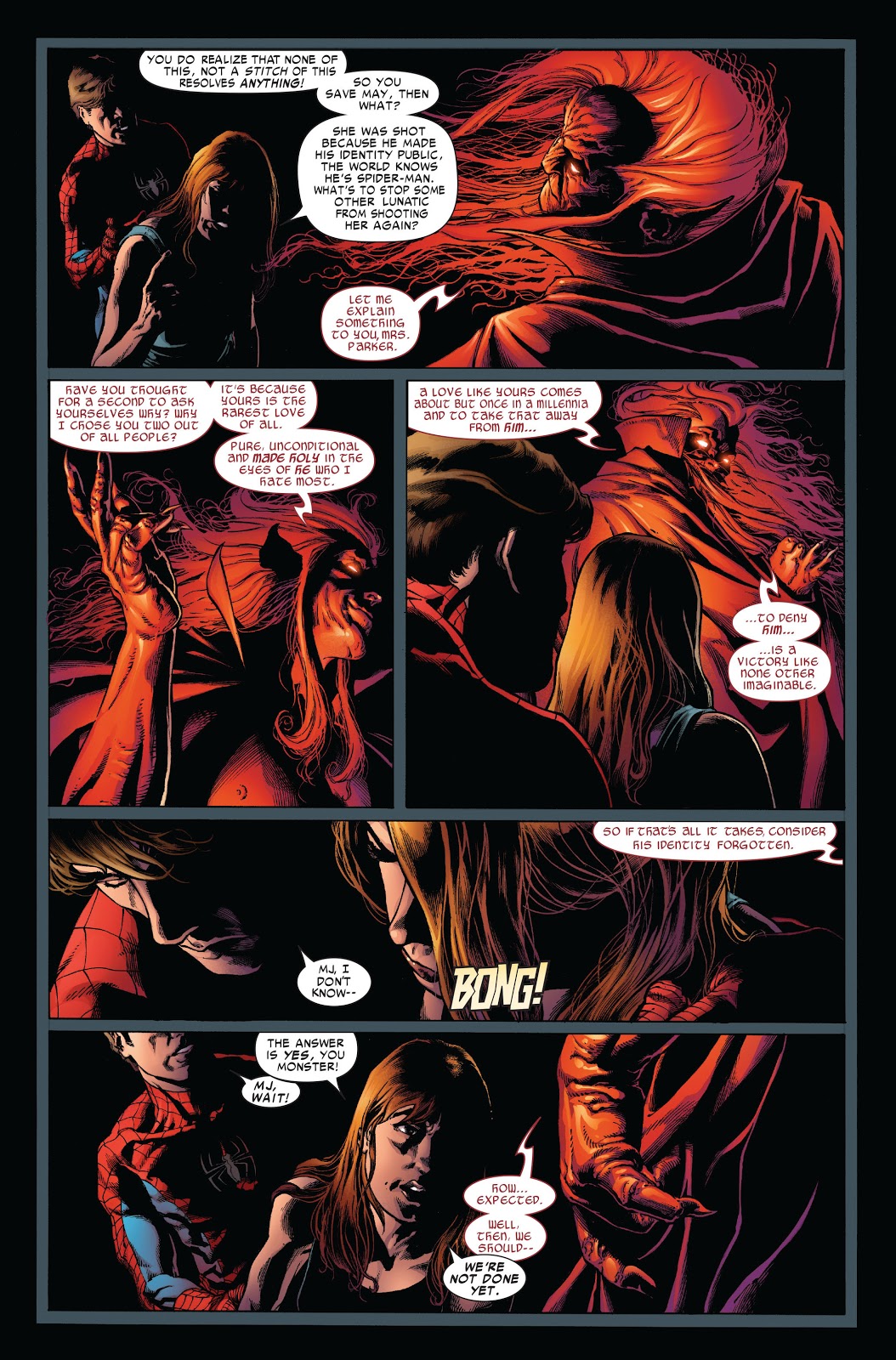 The currently accepted answer is correct. However, the specific mechanism by which Peter's identity was erased from the world's memory (and from recorded history, since he revealed his identity on camera) was revealed in the "One Moment in Time" storyline, in Amazing Spider-Man #638-641.

That mechanism was through a variation of what Dr. Strange and Reed Richards had done to (temporarily, as it turned out) remove the Sentry from the world's memory (including the memory of the Sentry himself). They added Tony Stark to the mix, because Extremis would allow him to better control the process, reducing the risk involved: 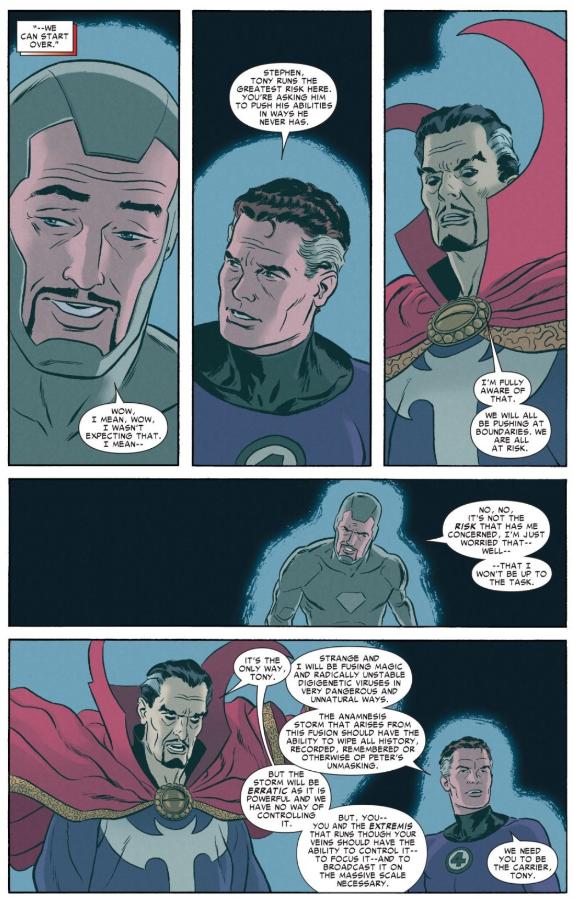 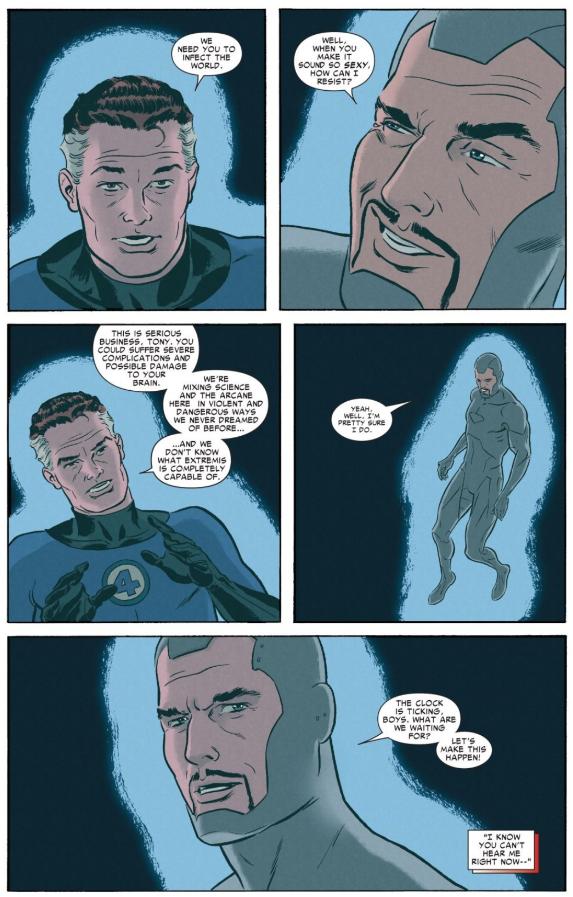 Since Reed, Stephen and Tony agreed that only Peter should remember the truth, not even they know the full details. And, it doesn't appear that Stephen went over the details with Peter, so he doesn't necessarily know, either: 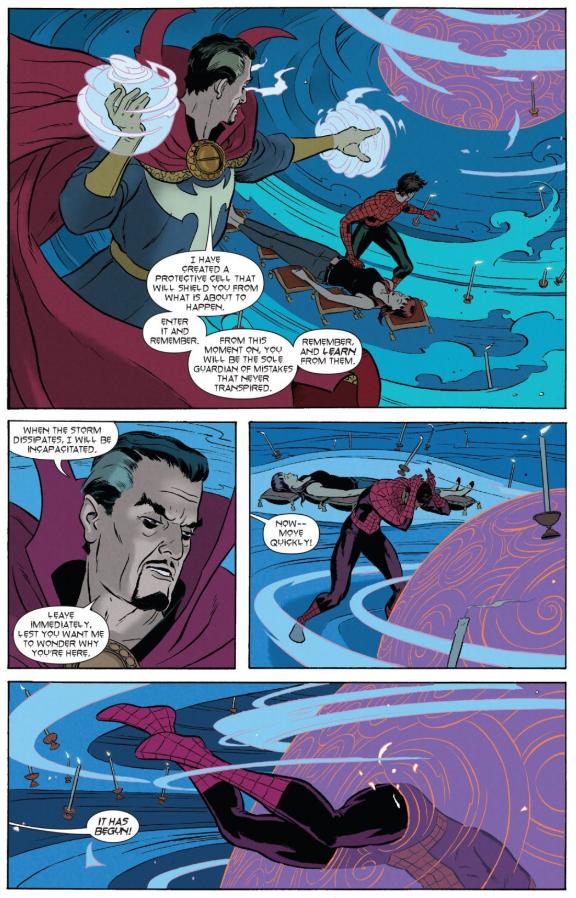 Because he can't imagine life without MJ, or keeping this from her, he pulls her into the "glob of remembrance" as well.

We know from previous stories that anyone he chose to remind of his identity would remember everything they'd forgotten. We also know he revealed his ID to the FF and the Avengers (at a minimum) after this.

Not the answer you're looking for? Browse other questions tagged marvel spider-man secret-identity marvel-civil-war or ask your own question.

6
In “One More Day,” did Spider-Man really have to make a deal with Mephisto?
11
Is there an in-universe explanation why nobody traced Spider-Man via his purchase of Oscorp Biocable?
10
Does Peter Parker regain his body again in Superior Spider-Man?
8
Why didn't Spider-Man gain natural spinnerets with his initial powers?
1
Are there any rules/guidelines regarding Spider-Man's appearance?
73
How was Spider-Man persuaded to join the side he did?
13
Who was the first Hero to reveal his secret Identity to the public?
1
Does Aunt May ever (permanently) learn that Peter is Spider-Man?
13
How many types of webbing does Spider-Man have?
49
Has J.J.Jameson ever found out that Peter Parker is Spider-Man?