There was this cool tv show I used to watch as a kid (in the 1990's I think). It was about a world where water was extremely rare and people used to fight over it, however there was this person who had this large 3D polyhedron shaped device (big enough to fit a few people in it) that could synthesise water.

Now, this device was either a time travel device or could just make water (not sure but I remember some time travel aspect as they could either remember the world the way it was where water was plentiful or could travel back to it on occasion).

Anyway, would love to know if this rings any bells?????

This is possibly the Australian TV series The Girl From Tomorrow from 1990 (or more precisely, the sequel series from 1991 which might simply be considered a second season).

The first was mostly set in present day (with a girl from the far future), but the second was set in the year 2500, still the past to the title character, but the dystopian future to the other main cast.

From the Wikipedia description of the second, we see a setup like you remember.

The year 2500 is a polluted, miserable dystopia, where GlobeCorp owns everything, and the majority of people live in relative squalor. Clean water and uncontaminated food are hard to come by, although the elite enjoy life in comfortable skyscrapers, and the top leaders live in a colony on the moon.

The large polyhedral device you remember was the time capsule itself, technology from the year 3000 which could synthesize water from the atmosphere. 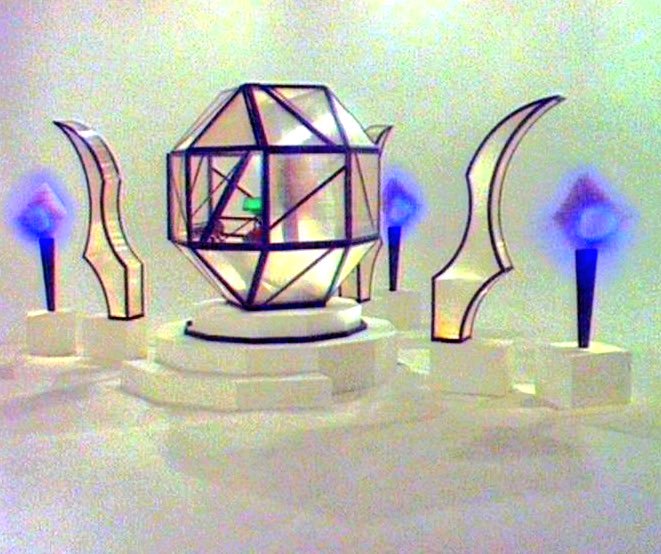 7
Undersea volcano washes deep sea limbless slime horror with a terrible appetite onto beach and into local town?
10
In which movie/TV show do characters use a hand-held organic-looking creature to travel into a virtual world?
9
What dystopian TV show has kids running an underground newspaper?
23
Movie about a teenager discovering time travel
9
What was this book (time-travelling kids, an old house, a wizard, turning into animals...)
9
Book about interdimensional travel by use of a hallway
4
TV show about a group of people that travel through time to the past trying to identify an evil character
9
Time Travel book from 70's where people were sent from 150 years in the future to our present time
5
Book: Two kids get powers where one is so fast that time seems to slow down around him while other can control time itself