Somewhere in the 1990s, I think, I read a short comic in a gaming magazine involving a man entering a fighting tournament. I want to say that he was Caucasian and blond, but I won't swear to it. One of his early opponents was a black boxer, who's taken down with relative ease with a leg sweep with the protagonist explaining that one of the weaknesses of traditional boxing is that they never learn to defend the legs. Shortly thereafter, the protagonist winds up in a situation where they're attacked by something supernatural. I want to say that one of the fighters, maybe the boxer, got empowered by some dark force. The protagonist is on the ropes in the fight until he does something and transforms, suddenly encased in colorful armor. That ended the comic, but the final page had a picture of an NES game with 3-4 people in superhero costumes (which didn't exactly match the armor the main character was wearing in the comic) on the cover. The title might have had something to do with dragons, or maybe I just saw a dragon theme in the portrayal.

I have a vague memory that I might have run into the game and played it, although I recall thinking it didn't seem quite right, with a different cover and more of a mystical story. In the game I played, it was a martial-arts sort of game with levels splitting between side-scrolling with various mook enemies and tournament battles with tougher opponents. One of the things that stuck out to me was that you could attack on multiple levels, I think low, middle, and high, and block on those same levels, with the opponent's strikes and weaknesses showing up as circles and stars respectively. I also remember encountering an opponent who only attacked high with punches with a weakness around the legs, and thinking that this must be the scene from the comic with the boxer. I actually don't recall if there was any transformation in the game.

I know... it's a vague memory, but I'm hoping someone might recognize it.

Some good amount of Google-Fu brought up this:

Flying Warriors (Wikipedia Article) Originally released in the 90s on the NES.

The game features combat in a variety of formats, such as kicking and using fireballs to repel monsters in scrolling stages, a system during one-on-one duels against Tusk Soldiers or a pair of martial arts tournaments where the player must attack a mark that appears on their opponent's body, or defend the area when it appears on them (this system is similar to Culture Brain's original Flying Dragon for the NES), and RPG-style command battles against monster bosses. When confronted by a Tusk Soldier or other otherworldly villain, Rick can change into a costumed superhero form or switch with one of his teammates.

This two points seems to match your description, but the plot doesn't seem to reference any specific battle against a "black boxer, who's taken down with relative ease with a leg takedown".

That said, the end of the article does indeed state that

Some major characters later appeared in the North American versions of Hiryū no Ken Gaiden and Hiryū no Ken S: Golden Fighter, known as Fighting Simulator: 2-in-1 Flying Warriors and Ultimate Fighter. Rick Stalker and his mentor Gen also appeared as cameos in several titles in the Super Chinese series, also by Culture Brain. A manga adaptation based on the game was translated and published in the early issues of GamePro magazine.

I was lucky enough to find some screenshots of that comic. 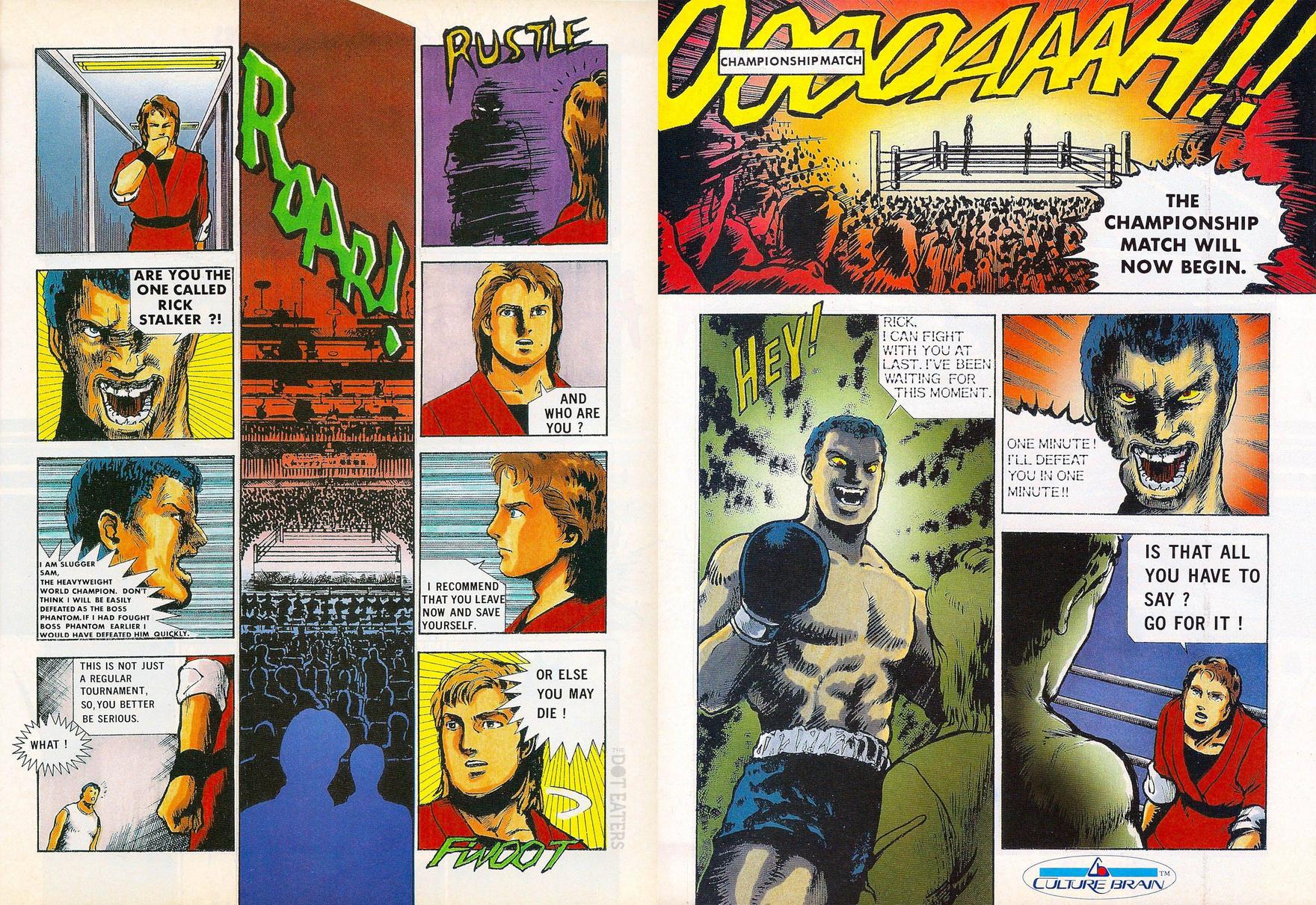 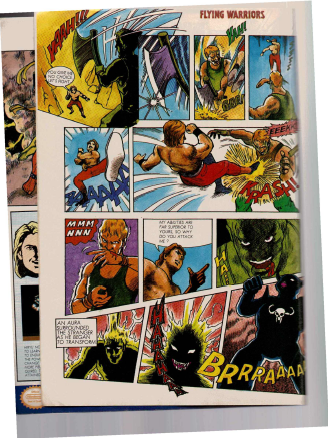 Here you can see someone fighting. Then the opponent seems to "get empowered by some dark force", which matches your description.

Also worth noticing is the final page: 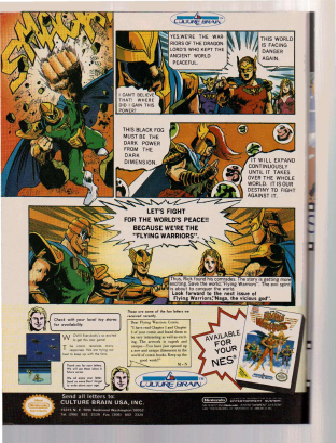 It ends with an ads for the game.

Based on this evidence, I think this may be the game/comic you remember.

Not the answer you're looking for? Browse other questions tagged story-identification comics video-games or ask your own question.

11
What was this French comic, published circa 1990, involving a group of mages fighting?
17
Racy and lewd Sci-Fi comic from late 1990's/early 2000's with two girls, fighting?
7
Arcade Game with network-like enemy
27
NES game with town building between RPG/Hack-and-slash levels
13
Video game with a black female police officer who starts out fighting gangs, but then fights "Men in Black" with sci-fi weapons, and eventually demons
1
1999ish console game involving male and female protagonists fighting demons in a city
3
RPG with a rune that left a "brand" on you at the cost of Health damage
4
3d puzzle game involving a young child and their large (imaginary?) friend
14
Game featuring a superhero duck in red and blue with a gun
7
Game about a squire who progresses to a knight while fighting a dragon and enemy soldiers in an over-world