Looking for a book, maybe from the 50's, about a secret agent with an atomic car [duplicate]

I read this book in the 80's, but it was pretty old at the time. What I recall:

It had a pulpy, Tom Swift type of feel, and it wasn't at all high literature. But I'm wondering what it was. I'm pretty sure that the events listed above were all in the same book, but I may be conflating two different series.

story-identification books pulp
Share
Improve this question
edited May 12 '18 at 12:49 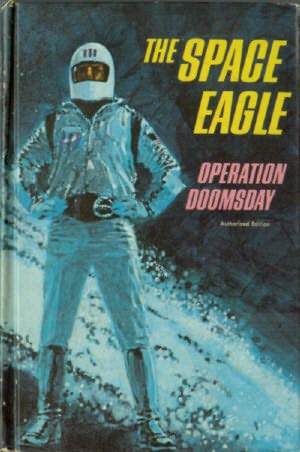 The Space Eagle by Jack Pearl

Paul Girard of Girard Enterprises is recruited by the President of the United States to be a secret agent. His sister has invented various gadgets for him to use, including a hormone pill that temporarily renders flesh to be like clay, to allow the face to be sculpted for disguise purposes

But the prize is the Swift, an antimatter powered spacecraft that his sister puts a governor on because she cannot trust him to avoid exceeding the speed of light. At the end of the mission he has to manually remove it so as to travel back in time to stop global thermonuclear war

Not the answer you're looking for? Browse other questions tagged story-identification books pulp or ask your own question.

11
Tracking down an old sci-fi book