Ask Question
Asked 4 years, 1 month ago
Modified 3 years, 7 months ago
Viewed 3k times
7
This question already has answers here:
Cartoon with a boy that has a red rhino monster and chases and fights other monsters [duplicate] (2 answers)
Closed 4 years ago.

So a few years ago, I used to watch this cartoon with my dad around 5 years ago and I can't remember for the life of me what it was. Here's all the stuff I can remember:

If anyone has any idea at all what this might be, please let me know.

jo1storm: "And yet another answer from me: From the makers of Redakai, Conquer the Kairu comes: Kaijudo, rise of the Duel Monsters

Also black haired kid wearing red, girl and funny large guy and this time gloves are much more prominent. Check it out:

That sounds to me like Redakai: Conquer the Kairu. It is made according to Yu-Gi-Oh! formula.

Conquer the Kairu, also known simply as Redakai, is a Canadian/French animated series that premiered on YTV in Canada on July 9, 2011, on Cartoon Network in the United States on July 16, 2011 and on Canal J and Gulli in France on October 22, 2011. 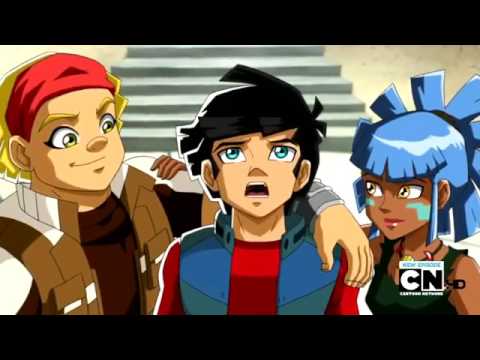 It could also be Bakugan Battle Brawlers.

The first episode of the anime television series (produced by TMS Entertainment, Dentsu Inc., and Japan Vistec under the direction of Mitsuo Hashimoto), made its debut in Japan on TV Tokyo on April 5, 2007 and was rebroadcast six days later on BS Japan. Nelvana Limited produced the English-language version and premiered the series on the Canadian network Teletoon in July 2007 and then on Cartoon Network on February 24, 2008.

Dan Kuso's life changed one day when random cards fell out of the sky with special powers. He and his friend Shun invented a game called Bakugan with these. Together with his friends Runo, Marucho, Shun, Julie, and Alice, they form the Bakugan Battle Brawlers and its members are accidentally dragged into fighting for the fate of Vestroia (the Bakugan's home dimension) against the Doom Beings.

The season is the story of a dimension called Vestroia which loses its natural balance and merges with the Earth and many other worlds. An evil Bakugan called Naga was tempted to take the power of the Infinity and Silent Cores, which formed the Perfect Core that balanced Vestroia, but absorbed too much negative energy and thus was trapped within the Silent Core and destabilised Vestroia. So Dan and the brawlers decided to bring back balance by meeting new friends and allies in the other worlds, learn more about the origin of the Bakugan; and facing Naga, a rogue bakugan who seeks the mighty Infinity Core so that he could complete the all-powerful Perfect Core and have almighty power and absolute control over Earth and Vestroia.

Check if this rings any bells.

6
Cartoon series with Infinity gauntlet-like worn by a teenage boy
7
Cartoon with an evil scientist/doctor
8
Cartoon where characters would fight with capsule gauntlets that shoot out small creatures
4
Cartoon with a boy who goes to another world, where he fights monsters and meets a boy and a girl
3
Superhero cartoon where a blue-and-white alien combines with the hero