Was the creature guarding the camp in the Dungeons and Dragons movie a beholder?

In the 2000 movie Dungeons and Dragons we see a creature that looks like a floating meatball with eye stalks. While at first glance, it looks like a beholder. But did the script say that's what it really was? Or was it actually a spectator

Here is an example of the scene in question: 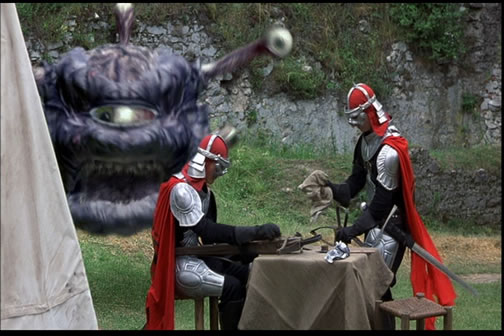 They're beholders. Snails identifies them thusly in a voiceover a few seconds before the scene pictured (when they climb up the grapple lines)

You might wish to note that given the crudity of the CGI (and the fact that they don't interact with any of the actors) that they were probably dropped into the film long after the scene had been filmed and tested on audiences, explaining their total absence from the film's official novelisation.

Not the answer you're looking for? Browse other questions tagged dungeons-and-dragons or ask your own question.

4
What did Profion put into Damodar's head?
10
Dungeons & Dragons novel about a flying machine
7
To what extent were Dungeons & Dragons were-rats based on The Swords of Lankhmar?
5
Was the trident (named Wave) in the AD&D “White Plume Mountain” adventure a reference to anything specific?
12
Does the Dungeons & Dragons Movie (2000) take place in any known setting?
6
Was the illustration of the “Primordial One” in the AD&D Deities and Demigods based on the one from Barlowe's Guide to Extraterrestrials?
6
Looking for a specific “Dungeons & Dragons” related movie