Why would the colonists choose that location for their city?

In the re-imaged version the colonists eventually find a planet which they attempt to settle on.

Here we see their newly formed city. Devoid of plant life, dusty, dirty, and sad. Sure, they have a lake, but it is suspiciously absent a marina.

There does not appear to be any attempt to grow grass or trees to contain the dust and to beautify the spaces. 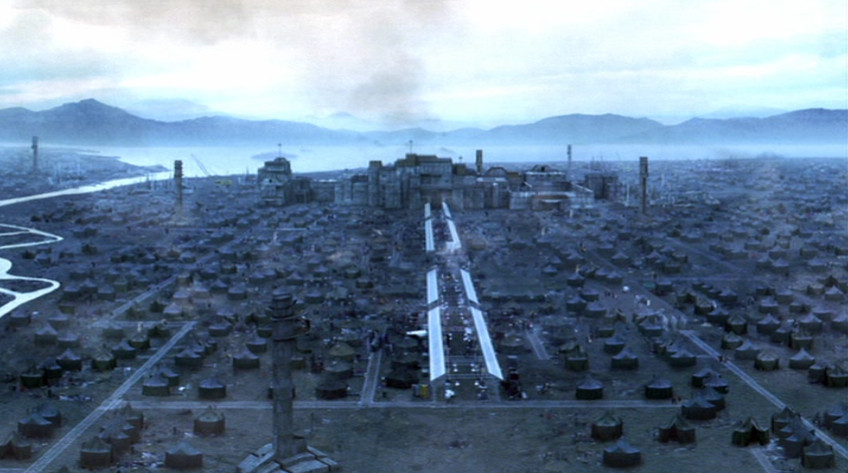 And yet, within walking distance of the new city is a place that looks like this. 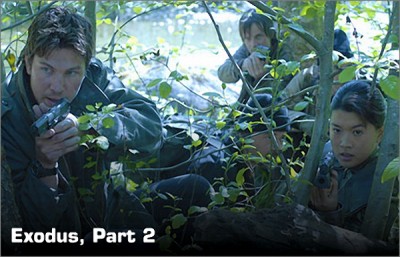 Minus those traitorous Cylons this looks like a nice place. We see lush foliage, trees, and a clean river. So why didn't any of the colonists live there?

I don't think there is an explicit in-universe reason for choosing this site - but we can use what we know from BSG to work out why they might choose it.

The planet they discovered was actually quite inhospitable, and there was a very small temperate zone that they could settle within. Add to that, the need for water, and the need for solid ground that was easily cleared and built on for a first stage settlement, and then you arrive at somewhere like the site in the picture above.

The fleet consisted of less than 50,000 humans at this point, and you have to think exactly how many of that population would be qualified to design, engineer, and build dwellings and factories. Also, the resources immediately available to the colonists would be extremely limited - unless they happened to have construction equipment in a cargo container, they're going to have to do a lot of work by hand, at least until they can set up mining, smelting, and factories.

Not a lot of time passes between the landing and the arrival of the cylons, only a few months, if I recall correctly. So, spreading out into the hinterland would have been limited - it makes sense to centralise your population at first as you start to build up your infrastructure.

Finally, if you were to site a city - would you waste limited fertile ground (back to that limited temperate zone) for building on, or would you build on infertile ground and put farms on the green bits nearby?

In the episode Unfinished Business there was a brief talk between Laura Roslin and Adm.Adama where he says the soil in the area consisted of the the "alluvial deposits" from a former river mouth. Therefore the soil is fertile and more hospitable than the rest of the planet.

One possible reason for choosing such a flat, barren site was that it was ideal for landing of the spacecraft. People probably set up camp around the craft so they could have access to basic amenities that they had not yet built on the ground.

42
Why did the humans leave their original planet to found the colonies?
8
Why Couldn't the Nuke that Blew Up Cloud 9 Be Traced?
6
Why Would The Gun on Ice Planet Zero Hold Up an Entire Fleet?
7
Why Didn't the "Final Five" Program a Respect for Humans in Humaniform Cylons?
15
Why did the original-Earth have continents that resembled the ones on the final-Earth?
5
For a technological advanced race why do the humans of the Colonial fleet still use paper for record keeping?
14
Why is the Gayatri mantra used the BSG opening theme? Are the Cylons or the Colonists Hindu?