During WWII, a group of science fiction writers, Robert Heinlein & Isaac Asimov prominent among them, were involved in a classified project for the US government.

Isaac Asimov mentioned this project in his autobiography In Memory Yet Green. There are also some comments on it in the posthumous Heinlein tribute/collection Requiem; several people are quoted to the effect that Heinlein never said exactly what he did because it had not been declassified.

Have the details about this project and these writers’ involvement since been declassified? If not, are there any hints as to what the project entailed?

There are actually plenty of details about their work, for example in Learning Curve, Heinlein's authorized biography. It may have been classified at one time (most war operations were as a matter of course) but it's not any more. De Camp and Asimov wrote about it too. 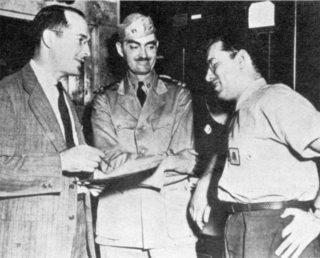 There have been rumors that the group were somehow tied to the apocryphal "Philadelphia Experiment". De Camp responded to this question himself and said basically: that's a great story but he worked on testing hydraulics and de-icers and equally mundane problems

According to a couple chapters of Heinlein's book, they worked at the Aeronautical Materials Lab at Philadelphia Naval Yard. Their work included a "high altitude pressure suit" (an early space suit), and a "Cold Room" (a cryogenic hypobaric chamber) to test exposure to extreme cold and low oxygen. Heinlein was also the personnel manager (where he broke policy by hiring female engineers) and worked on "mechanical problems of Plexiglas aircraft canopies" (where he got in trouble for refusing to falsify data). Heinlein was officially retired Navy, De Camp was a Navy reservist, and Asimov was a civilian contractor (though he was later drafted in September 1945). Forry Ackerman was involved too, as an Army enlisted man.

But the most important work they did was not something they directly worked: they contributed ideas to and consulted on the development of the CIC or Combat Information Center - the today-familiar Operations Room of a combat vessel. Their consultation was regarded as critical to its development. The idea came right out of, and is still part of, science fiction and was implemented in reality by the US Navy during WWII. So it's a funny bit of history -- the Operations Center came out of Sci-Fi as related by Heinlein/Asimov/deCamp, got implemented for real in the Navy, and now the Ops Centers in modern Sci-Fi are directly informed by the real-life ones, full circle! But it's a stretch to say they worked on it.

Basically the truth was this: Heinlein, De Camp, and Asimov were friends and colleagues, the war meant they had to either serve the US professionally or get drafted, and they were all educated men who could do useful engineering work. So Heinlein worked hard to get his friends and colleagues jobs in a stateside engineering center rather than on the front. Since they were very bright people with good scientific knowledge, their contributions were useful though not mysterious nor earth-shattering.

There was a novel released last year, The Astounding, The Amazing, The Unknown, which fictionalizes and sensationalizes the whole idea but in not in fact true :)

You might also check out the Cleve Carmill Affair (1) (2), which involved Heinlein/Asimov/DeCamp peripherally, as well as John Campbell. That's when the US Gov't was convinced that Carmill and Campbell had been stealing nuclear secrets.....

17
Did Heinlein express an opinion on "non-traditional marriage" in real life?

17
On the personal relation between Phil K. Dick and Robert Heinlein?
22
Degree of collaboration between Asimov and Silverberg on Nightfall novel?
47
Is there any evidence for the bet between Robert A. Heinlein and L. Ron Hubbard?
16
Robert Heinlein story that begins with a card game followed by an alarm and a shelter
10
When did Asimov decide to unify the Foundation and Robots series?
20
Did Heinlein intend to portray men and women as equals?
11
Robert Heinlein character quote about Hell and kittens
7
Isaac Asimov short story: circa 1976, male astronaut saves space station inhabitants during solar storm
22
What is the first work of written fiction in which science fiction authors are consulted by the government during a crisis?