It was an anime where the lead character has a mecha suit that's composed of 3 robots, one bigger than the previous, the smaller one fits into the medium one and this fits into the bigger one. I think each one had different abilities.

story-identification anime mecha
Share
Improve this question
edited May 15, 2018 at 21:31

This is the 1979 anime TV series Gordian. The protagonist of the anime pilots the robot Protesser, which nests itself inside the larger robot Delinger, which finally enters the largest robot, Garbin, in the same way, forming Gordian. Various cutaway illustrations showing how the three robots move together are an iconic representation of the series. 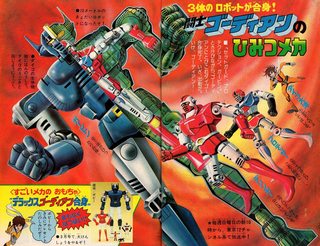 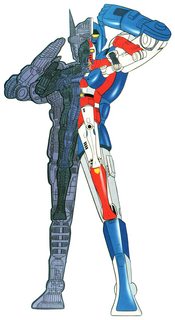 Among anime robots, this particular gimmick is actually almost unique to Gordian. One of the only other similar robots is Baikanfu, from the 1986 anime Machine Robo: The Revenge of Cronos. However, Baikanfu does not consist of three robots in the same way as Gordian, nor does it have a human pilot in the center. The cast of Machine Robo are mainly living robots, and the protagonist of the series, who is an android, takes the place of the Protesser robot from Gordian. So the image seen in the Revenge of Cronos anime is of the protagonist merging with the giant robot Kenryu, which then merges into the larger robot Baikanfu.

Since the series you saw had a pilot who uses three robots, and because each robot's unique abilities were shown off, it's almost definitely Gordian.

5
1990s anime with Spaceship shaped like a white dragon and has guardian manned robots?
5
Anime with boy who can see fighting mecha robots in parallel world
5
Early 90s mecha anime where the mecha was like Voltron in that each pilot controlled a portion of the mecha that would merge into a bigger mecha
7
Mecha anime with giant robots summoned from sky, water and earth
5
Anime series with the underdogs in school being selected to use a new type of mecha
6
A 90s anime/cartoons/ with a main character who has a red mecha suit with a weapon like a spear!
4
Anime with the main character that can transform his arm into a giant cannon
5
Mecha anime where the hero gets two robot suits