Movie about Space Pirates that have bodies tied to their ships

I'm trying to identify a Sci-Fi movie from I believe the 80's or 90's where a spaceship has to travel through a group of spaceships that belonged to cannibal people with bodies tied to their ships. They disguised their ship to look the same to travel through them to get to a planet to meet someone?

I had thought it started with an "S" but I think I was thinking of Serena (which isn't it). Any ideas?

story-identification movie
Share
Improve this question
edited May 18 '18 at 12:29

This is Serenity (2005) the follow up film to the TV series Firefly (2002). In the scene you've remembered, the crew strap bodies to the ship to blend in with the Reaver fleet around Miranda.

The Reavers are cannibalistic space pirates. They're the background boogeyman in the series and come into prominence during the Serenity Film. 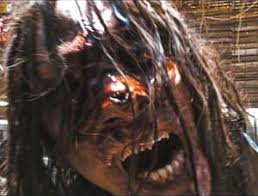 The crew need to get through what is essentially a Reaver blockade and strap bodies to the ship, scuff it up and cover it with blood/red paint, in an attempt to disguise themselves enough to pass unnoticed.

Up above, in the comments, @joshperry says:

Perhaps the reason you are thinking of the 80-90s timeframe is because this plot line is very similar to the first book from Piers Anthony's Bio of a Space Tyrant series; Refugee.

When I read the question, I immediately thought of that book. It was written with very vivid visuals, so I can definitely imagine it being mixed up with a movie.

Here is what happened in the book:

A bunch of refugees on a space ship. They had a ton of problems; at one point were boarded by pirates. The pirates killed all the men on the ship and raped all the women. The refugees put all their men outside the ship attached to a tow cable. After a while, the refugees were staving to death, and they slowly brought the bodies in tow back onto the ship and ate them.

While this does not precisely match details of the question, it matches to a certain extent the title question.

Here is the Wikipedia Link

19
Late 80s - mid 90s Disney TV movie with mechs
16
Book about aliens who attack Earth and destroy the Sun
11
Scifi short story. Alien makes first-contact with humanity but finds us overly obsessed with sex
9
Animated Movie identification (before 1990)
12
Story about an abandoned space-ship with lots of humanoid bodies dumped in its core
20
Sci-Fi series occult religion spreading throughout the galaxy