I recently got to know that the Glaive of Corvus can cut through anything in the universe, but I also know that Captain America's shield is made of Vibranium which can absorb all impact energy, so what will happen if Corvus Glaive and Captain America are battling with their weapon head to head?

marvel marvel-cinematic-universe avengers-infinity-war
Share
Improve this question
edited May 22, 2018 at 14:23

As your wiki source notes, that tidbit about his glaive being able to cut through anything is from the comics, so it isn't necessarily true in the MCU. Conversely, the same can also be said that Captain America's shield in the MCU is not stated to be the strongest thing in the universe unlike the comics. So if we're going to compare, we're going to need to compare apples to apples.

Borrowing from the answer to the same question over Quora, considering the glaive couldn't even pierce Thanos' gauntlet, I'd imagine that neither could it penetrate the shield. 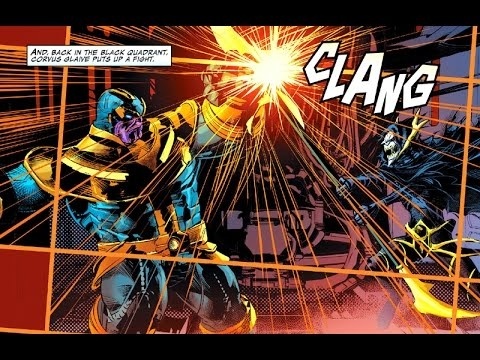 Since neither has "ultimate" properties like in the comics (cut through anything in the universe vs strongest material in the universe), this one is decently straight forward, and can be reasonably determined from what we've seen on screen.

MCU Captain America's shield is made from vibranium (as opposed to the comic's unique alloy). As per the comment above by Harry Johnston, Vision's body is also made of vibranium, and yet we see the glaive manage to pierce him. While Vision is not pure vibranium, we should still expect its strength and other properties to be present (like in Black Panther's nano-weave vibranium suits). Thus, it would be reasonable to assume that the glaive would likely be able to pierce the shield as well.

It's not a 100% clear cut case, but it's pretty compelling evidence all the same.

59
Why can't adamantium cut through vibranium?
57
If vibranium absorbs kinetic energy, how can Captain America hurt people with his shield?
5
What, exactly, is Vibranium able or not able to absorb?
7
What else is Captain America's shield made from?
4
Would Earth-616 Vibranium negate an energy-based weapon?
2
Could Antarctic Vibranium destroy Captain America’s shield?