There was an alien life form that was machine life, an interstellar spacecraft that traveled to new solar systems, ate asteroids, and used the material to spawn offspring. Sort of a living von Neumann self-replicating space probe. She and her offspring were quite capable of catching and devouring human-built spacecraft.

If I recall correctly, there were aliens living in the solar system's Oort cloud of comets. They were refugees who fled an infestation of the machine life in their home solar system, and were hiding in ours. Part of the plot was the aliens trying to peacefully contact us humans to alert us to the threat. The aliens had detected the machine life queen heading this way, but humans were had not spotted it yet.

The paperback cover was mostly black, with a dark planet and a fan-like spray of sparks radiating from a point. 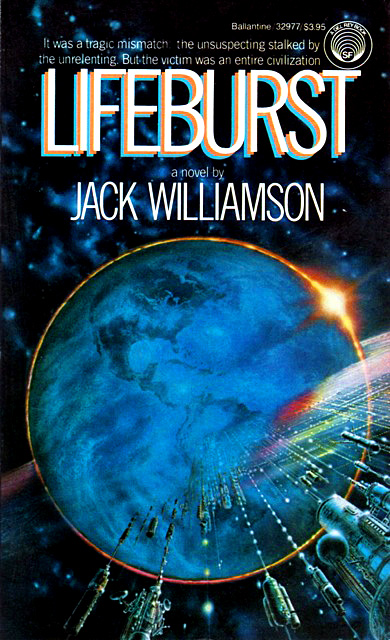 Somewhere, eons past, the seekers had begun as weapons - cyborg war machines. Nuclear explosions and powerful lasers meant little to them, for each was larger than ten battleships and subsisted on a diet of heavy metals, preferably radioactive. Soon the seekers began their own Lifeburst, flying to nearby stars, evolving, eating, destroying... our solar system next.

13
Identification: a story about an entire spaceship converted to anti-matter
10
Story about a colonized planet of butterflies that are telepathic plant life
32
Short story about aliens warning humanity not to leave Earth
10
Short story about shark-like alien species that eats other sentient aliens
10
Scifi novel about a prison station in the sun that turns into an alien invasion
16
Short(?) story with planet-wide spaceship-digesting plant life
7
Cartoon about a dinosaur that eats clouds?