Is there an Avengers Illuminati reference in Age of Ultron?

I was watching Avengers: Age of Ultron (2015), and saw this sticker in one of the scenes in Sokovia (in particular when Quicksilver is listening to Captain America's speech, right before a piece of paper covers it): 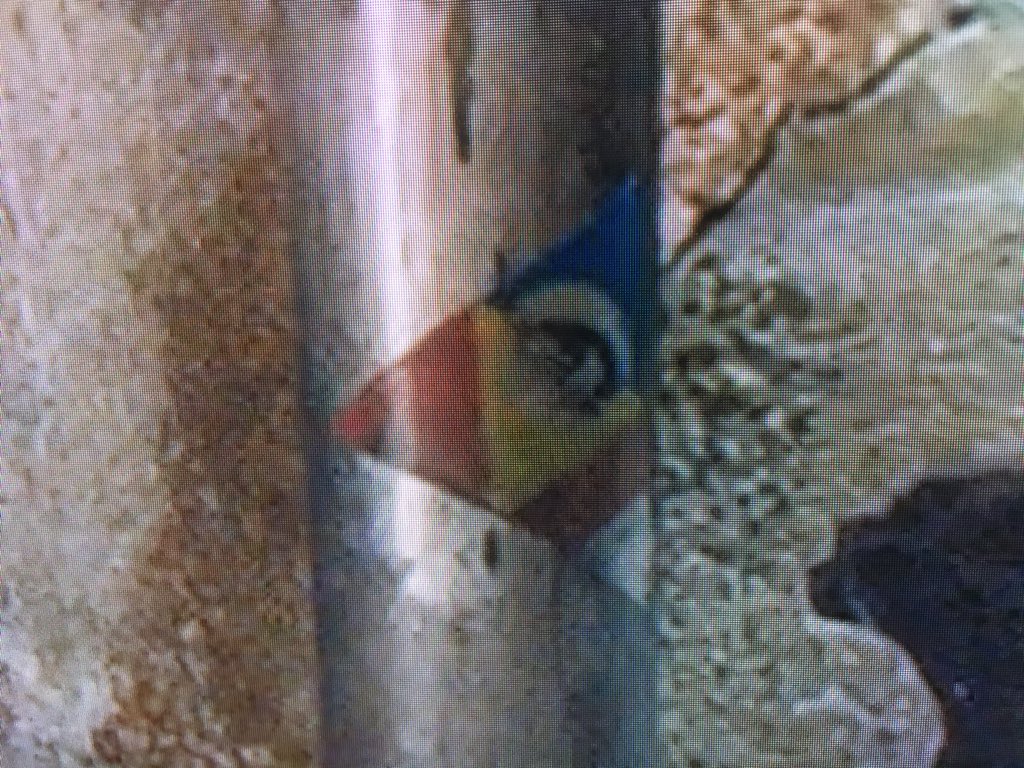 It looks like it could be related to Avengers Illuminati (triangle with eye inside, and the colors of the members), but I could not find anything about it (in the comics or online).

Is that a reference to any other Marvel movies/universe? And if it is, should I have read/watch something first to get it?

No official statement or comment has been released regarding this sticker. Thus, we cannot confirm or infirm that this sticker is actually related to the Illuminatis. However, I believe there is a set of striking coincidences which point towards this sticker actually being a subtle reference :

Let's review these points in order.

1. The bottom part of the triangle is red and gold, Iron Man's classic color scheme. This could reference the Iron Legion's status as the "working men" of the Avengers, expendable units built solely as the Avengers' grunts and workforce. They perform non-combat tasks like warding off citizens. On the other hand, the leading man of the group is Captain America : he's the military strategist and moral beacon who ensures the cohesion of the team, and its ruthless efficiency on the field.

Tony Stark (aka Iron Man) is a founding member of the comics' Illuminatis, who represent superhuman communites (the Fantastic Four, Atlantis, the X-Men, mystics, the Inhumans, and the Avengers). The purpose was to share valuable intel about internal and external threats in order to protect Earth efficiently. Most notably, each member of the Illuminatis believe they are qualified to protect Earth in secret. As Black Panther tells them before rejecting their adhesion offer :

You just decided all by yourselves that you are the Earth's protectors. And that you, and only you, not your teammates or family, are trustworthy enough to include in the process...

2. In Avengers : Age of Ultron, the titular supervillain is created when Tony's hubris convinces him he can program and unleash a superheroic AI. Intended to watch Earth through every mean available to detect threats and eliminate them (or send rescue efforts in case of a natural disaster), it was in essence a benevolent version of Hydra's own surveillance plan. In real life, most of the Illuminatis' mythos revolve around their supposed quasi-omniscient surveillance skills, used to control and cull whole populations. Why ? Because they believe they are better than the common folk. Ultron's concept is (theoretically speaking) an Illuminati's wet dream.

In Ulysses Klaue's SHIELD file, we can read the following description :

Ulysses Klaue was an assassin hired to take down T'Chaka at the Bilderberg conference in the case that he refused to negotiate Wakanda's resources including Vibranium. But, Klaue was also there personally, as the Panther killed his great-grandfather in the 19th century while this one was trying to annex Wakanda. He was paid ten million dollars for the kill.

Put together, these thematic elements may point to the Illuminati sticker being a multi-layered reference. I would say its actual significance hinges on whether you consider the Bilderberg meetings to be Illuminati reunions or not. And, of course, it is highly unlikely any member of the cast of production team will ever confirm or infirm this, especially if they do intend to create their own version the Illuminatis later on.

Ever since this question was first asked I've been looking on and off for some information on it. As far as I know as Caelistis' answer states there has been nothing on it. Again as their answer states this is most likely just an Easter Egg to the group. One of the founding members of the group was Doctor Strange who had an origin film coming out the year after so again it could be an Easter Egg/teaser to that for eagle eyed fans like yourself.

However, to take this a step further Kevin Feige was asked about introducing the group to the MCU in a press conference for Doctor Strange. Whilst he doesn't say it will happen or not, he does say some members of the group will interact in upcoming films. Of course now we know that was them all interacting in Avengers: Infinity War and Avengers: Endgame to beat Thanos and all become Avengers.

Well, what's fun about the Illuminati is that there are certain characters interacting with other certain characters, so I don't know about that particular storyline, but certainly some of those characters you will see on screen in the next Avengers.

After the events of Avengers: Endgame we can probably rule out the Illuminati existing as they do in the comics but that doesn't mean the group won't form later down the line with different characters. It also doesn't rule out a secret society that just hasn't been shown yet that will come to light in the future but it does seem unlikely.

Not the answer you're looking for? Browse other questions tagged marvel marvel-cinematic-universe avengers-age-of-ultron marvel-illuminati or ask your own question.