How does one ride a broom in Harry Potter films?

I was wondering, after watching the Harry Potter films several times earlier, the way the witches and wizards fly on brooms is quite impossible the way I see it.

The very short answer is that while older designs of broomstick were extremely uncomfortable, modern brooms are fitted with a "cushioning charm" intended to make the ride smoother and more pleasant. Pedal placement is therefore down to the individual's personal choice rather than the raw necessity of staying on the broomstick

image courtesy of 'Quidditch Through the Ages'

I've been to the Harry Potter recording studios in London, where they had a couple of brooms that you could sit on and make a green screen recording.

The brooms have small seats, which you sit on, as described by @Valorum above. 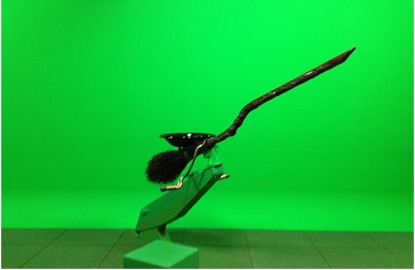 As you can see there is also an engine attached to the broom, which makes small movements to add effects.

So in this case a seat and some foot pedals give you enough stability.

I think that magic has some effect on the entirety of flying a broom. Especially the part about being upside down.

Not the answer you're looking for? Browse other questions tagged harry-potter magical-transportation flying-brooms or ask your own question.

12
Wasn’t Quirrelmort a bit too adept with an intentional wandless magic in PS?
63
How does one leave platform nine and three-quarters?
43
Which characters have been recast in the Harry Potter films?
18
Why didn't Harry just buy the whole team Nimbus Two Thousand and Ones?
32
Why are flying carpets banned while flying brooms are not?
4
How does Hagrid track Harry and the Dursleys when they try to escape the letter-sender and how does he travel during that period?
16
Is there an upper height limit to magical flight in Harry Potter?