It was a thin collection of short stories - the main character was a girl, who joined a group of ladies being sent off to marry men, who were aliens/creatures. These men were able to hide their true identifies with "magic" and created the illusion of beauty and wealth thus attracting a girl. The main character could see through the illusion and while she picked a mate, this fact caused a big problem.

story-identification short-stories
Share
Improve this question
edited May 22 '18 at 22:38

Year of the Unicorn 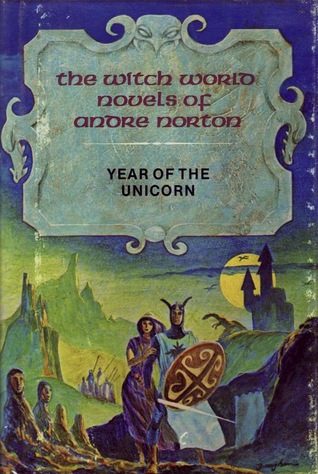 It is the first book of Andre Norton's High Hallack Cycle, set in her Witch World series.

Far from the besieged home of Simon and Jaelithe, in peaceful Norsdale, we meet Gillan, who longs to leave her dull life in a secluded country abbey. But when her wish comes true, she finds more than a little adventure. As she ventures out, not only is her life in danger, but also the power that lies within her, waiting to be discovered. ~Goodreads

Twelve plus one brides were promised by the lords of High Hallack, who were desperately fighting to free their homeland from the Hounds of Alizon to a mysterious and powerful group of sorcerers in return for their aid:

Shape-changers, warlocks, sorcerers...rumours had it they were all that and more. But also when they spoke upon oath they held to that oath-taking and were loyal. Thus they would fight, under their own leaders and by their own strange ways, yet for the right of High Hallack.

he promises of the Riders had been two: that they would come to the support of the Lords; and then, they would ride out of the wastelands, withdrawing from the land they had helped to cleanse, leaving it to the humankind alone. And the other side of that bargain-the payment the Lords of High Hallack had sworn dire and binding oaths to render? That was to be in their own blood, for the Riders demanded wives to carry with them into the unknown.

The riders had pretty specific demands who qualifies as a bride:

Twelve and one maids they asked for-maids, not widows, or those who had chosen to live beyond custom’s bonds. And they must not be younger than eighteen years of age, nor beyond twenty. They were also to be of gentle blood, and well of body. Twelve and one to be found and delivered on the first day of the Year of the Unicorn at the borders of the waste, thereafter to ride with their strange lords into a future from which there would be no return.

When the story starts, the war is won, and the procession with the promised brides arrives to the Norstead Abbey in which lives Gillan, a refugee girl from a far away land she escaped as a child. Gillan, to run away from her monotonous life in the abbey, switches places with one of the brides:

Thus it went as we had hoped. When Lord Imgry, who had avoided me heretofore, came to lead me forth, I went bent and weeping, so I hoped, in a piteous fashion. The last test came as we knelt for the Abbess’s blessing. She gave each the kiss of peace and for that I needs must throw back my veil for a moment. I waited tensely to be denounced. But there was not a flicker of change on the Abbess’s face as she leaned forward to press her lips to my forehead. “Go in peace, my daughter-“ She spoke the ritual words, but I knew they were truly meant for me and not Marimme. Thus heartened, I was aided by Lord Imgry into the saddle and so rode out of Norstead for ever, after some ten years of life within its never-changing walls.

Gilian posesses true sight and can see past the illusions woven by the sorcerers:

And then he leaned a little towards me and asked, more sharply than he had yet spoken: “What lies about your shoulders, Gillan?” “A cloak of grey and brown and fur-“ It was as if he caught his breath in a swift gasp. “And in me what do you see, Gillan?” “A man young and still not young, wearing chain mail and furred clothing, with a belt about him buckled with silver and milk white stones, with black hair on his head-“

...which complicates her already difficult situation, as the sorcerers don't take kindly to those people who can resist their magic:

Who are you?” His demand came with some of the same heat as Lord Imgry had shown at our night meeting. “I am Gillan, beyond that I do not know.” The truth I gave him because even then I knew that the truth was his right. “A war captive from overseas, fostered among the Dales of High Hallack, and come here by my own will.” He had dropped the veil into the mist, now his fingers moved in the air between us, sketching, I believe, some sign. There was a faint trail of light left by their moving so. But the smile was gone from his mouth and now he wore a battle-ready face. “Cloak-bound we are-and there is no chance in that, only destiny. But this I ask of you, Gillan, if the double sight is yours-see with the outer eyes only for this while-there is danger in any other path.”