90s? novel about an ordinary man pulled into a world of magic

This book is a fantasy book about a man who is pulled into another world where he has magic powers. He's pretty much a 90-pound weakling in jogging pants and sweats, since he was jogging in California when he gets pulled in. He's brought by this other man, also from Earth, as his replacement. This man has been there longer and gained more power. He doesn't really believe in magic, but starts believing when washing his face in a river cleans his contacts better than contact cleaner fluid. He sets off to visit this other wizard, who lives a long way away on/in a mountain. There's a funny scene where he takes out his contact lens and the members of his party scream, convinced he's plucked out his eye.

Wizard! You have plucked out your eye!

There's a bit of romance between he and a woman, where he learns that women have a spell cast on them to prevent disease and pregnancy and at a wedding, the priest removes this spell. Since they're not married, this means he can have worry-free sex with her. There may be some demons sent by an evil wizard.

Eventually they get where they are going and something happens. The other wizard is killed by this evil wizard, I think, before he can send him back. At the end, he learns that there are other ways back, made both easy and hard because his power means that magic and magical artefacts are attracted to him. He sets off for this lake, supposedly caused when some demonic rubies fell out of the sky. The gems are still supposedly there.

May have been the start of a series.

The start had a fairly detailed map.

story-identification novel
Share
Improve this question
edited May 23 '18 at 13:41

I remember a scene like the one you mention about the contact lens in this book: The Jewel of Equilibrant by Steven Frankos. 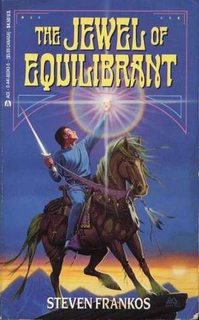 Sprung through the vortex into the land of Sparrill, Matt Logan lands on his sneaker-clad feet--with a sword in his hand. Now there's only one way back home to California: Matt must restore the Balance of the Wheel. With his allies Moknay the assassin, Thromar the muscled broadswordsman and the blue-eyed Cyrene, his quest begins....

19
Urban Fantasy novel: magic, the internet, and laptop trolls
3
YA novel with a rediscovery of healing magic?
6
British or Australian novel where a Wizard resurrects Balthazar
11
Novel series about magic users with seven lives
9
Young adult fantasy/scifi novel about Ancient Egypt
5
Movie about boy pulled into medieval ages
5
Fantasy novel about a nobleman on a quest
3
Manga about a man who learns magic in order to rescue his sister