I'm looking for a movie I've seen as a kid, the details are foggy and sparse but I'll try my best following the guide:

No detail is too insignificant

As anyone would expect from this kind of movie, there's a scene where the alien insects attack a group of people trying to suck their brains. A young boy was with those adults and survived with injuries in his head.

The old bald man have some surgery in his head due to an attack he suffered years before.

Using the web page What is my Movie? and using the keywords animation+movie+insect+brains I scrolled down and look at something that could resemble that movie. 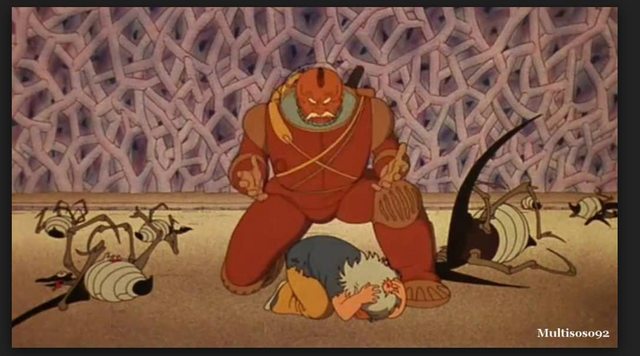 This is the trailer:

I immediately recognised the movie upon your description, and indeed, this is "The Time Masters", a French-Hungarian co-production animated movie. I remember how scared I was from the tentacles in the cave. And the faceless angels were also were quite frightening.

But the egg-shaped walkie talkie was cool :)

Not the answer you're looking for? Browse other questions tagged story-identification movie soft-sci-fi or ask your own question.

13
80's Animated movie: An old man joins mission to save a boy stranded on a hostile world
8
Animation (possibly anime) with space station made of two hemispheres
10
Fantasy Animation from the 80's. Companion pulled into ceiling by tentacles. Other turns around and companion is just 'gone'
6
Please help to identify an animated movie: a boy lost on a jungle planet (80-90-s)
7
Space-themed cartoon film seen on TV in the mid-80's with a pair of blobby telepathic aliens and relativistic aging
6
trying to identify SF anime film shown on British TV in 1980s or '90s
4
1980s sci-fi anime film with a scene where a human boy and an alien are walking through a swamp, and the alien is caught and killed by living vines
4
Animated film on TV in the 80s: a crane puts a seed in boy's mouth to bring him back to life

3
Early 90s(ish) Sci Fi movie with morphing alien
9
Sci-fi movie identification - men fight in futuristic chairs and get zapped to death
6
Movie about a man and a worm inside his head
7
Boy and babysitter are terrorized by life sucking vacuum
13
Science fiction movie with a hallway lined with brains and a conveyor with saws
3
I am looking for the name of a TV movie that aired in the early 80's, with a "Ship that Sang", theme
5
Scientific Horror Movie from the late 80's early 90's
8
Identify animation (80's) group of men encounter a witch in a cave
4
Anime movie where a girl meets a butterfly/moth boy
19
Sci-fi book about a boy with a brain tumor that causes him to feel constantly happy, despite the fact that he's heading towards death