Horror Manga about an (web)app that ends up killing people

I read a manga about a female transfer student that befriends the most popular girl in class, a site on her phone appears and it asks which student would the person most like to die. Thinking that it was a practical joke, she votes for her "best friend", the next day a humiliating video is posted in class.

Just before she can confront her friend, the girl dies from a hit and run accident. Traumatized, she believes that the app can kill anyone of them and the odds can be against her favor. She tries to find the culprit and learns about the truth, before her transfer there was a female teacher who had cursed their class before she committed suicide from her students mistreatment.

story-identification horror manga
Share
Improve this question
edited May 24, 2018 at 9:44 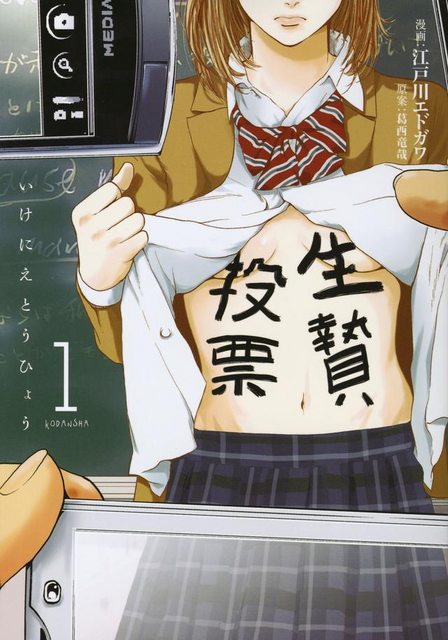 Life at the Yanagizawa private high school is boring for all attending students who prefer to stare at their smartphones for most of the day, just playing games and chatting to each other. Everyone's dormant lifestyle though seems to awaken when they are asked to vote for a classmate who will be asked to clear a task or otherwise become the "sacrifice" and suffer a "social death"! What does this mean though? Who will be the first one to be voted and what is a "social death"? The students will find out very soon that some games are far from innocent…

The description in the question is basically the 1st chapter of the 1st volume:

Note: as of current, this manga has not been licensed by an English publisher.

Not the answer you're looking for? Browse other questions tagged story-identification horror manga or ask your own question.

32
Manga about a female worker who got dragged into another world together with this high school girl and she was just told she's not needed anymore
3
Manga: girl goes through a door leading to a prince, stacked books, and her appearance changes to a female version of the prince
6
Fantasy manga about a girl who travels back in time to old Japan
5
Manga about protagonist (male, high schooler) who died in road accident and wandering as ghost at his school
1
A manga about a girl who goes back in time through a door to be with a guy who died
7
Manga where a man is being haunted by his dead female childhood friend that follows him around
4
What's the Manhwa where the protagonist is a demon king in the future?
3
Manga about modern-day high school student