How did Laura the drone end up in the Delta Quadrant?

In the Voyager episode "Unimatrix Zero" we meet one of Seven's Unimatrix friends called Laura who claims she was a Starfleet officer that was assimilated at the battle of Wolf 359.

However, from the TNG episode "Best of Both Worlds, part II" we also know that the one and only Borg cube that took place in the attack was eventually defeated and destroyed.

So, my question is: Assuming that Laura was indeed truthful about being assimilated at Wolf 359, then how did she end up in the Delta Quadrant?

The very short answer is that we don't know. She wasn't the only Wolf 359 survivor to end up in the Delta Quadrant. There were at least two others that we know of, and presumably many more given the various Vulcans, Bajorans and Klingons seen on Borg ships.

We know that Borg Cubes sometimes contain secondary ships like the sphere seen in First Contact and we know from Voyager that even small borg ships can access transwarp. The most likely explanation is that the Cube, as well as heading purposefully toward Earth was also picking up samples (via assimilation), then loading them onto scout ships to be packaged up and sent back to the Delta Quadrant for further study(?) and to be used as forced labour on their ships.

As you can see from this still from VOY: Collective, the Borg don't just assimilate people, they also assimilate their ships and presumably re-purpose them as slave transports. This would go some way to explaining how their home planet has 50 trillion inhabitants. 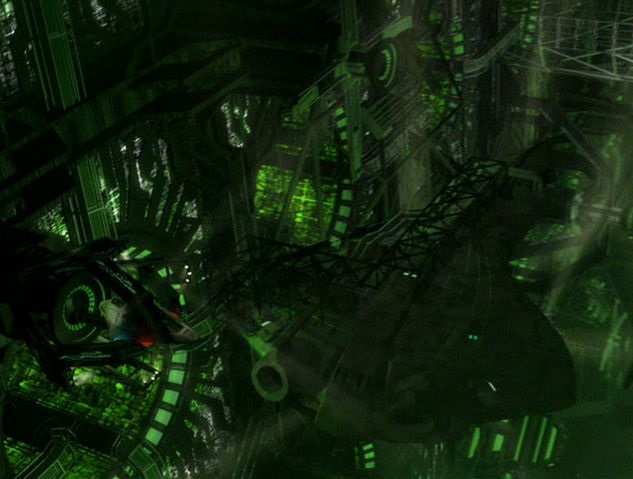 23
What exactly happened to the 18 crew members who were reported as “missing” in “Q Who”?

67
Why didn’t Voyager fly to the end of the Bajoran wormhole in the Gamma Quadrant?
30
Why did the Borg never bring waves of ships to the Alpha quadrant to conquer it?
18
What did the Borg Queen mean when she told Harry “We'll see you soon” in Unimatrix Zero?
15
What is the bloodiest war in the Star Trek universe involving the UFP?
7
How was General Korok able to take control of a Borg Sphere, and in such a short amount of time?
13
Did anything ever become of the particular Borg resistance movement that was created in the Voyager episode “Unimatrix Zero?”
5
How long did it take the Borg to get from Wolf 359 to Earth?
10
Why Didn't the Borg Attack the Federation Earlier?
18
Were the Borg Always intended to be a Delta Quadrant power?
3
Why didn't Voyager use fluidic space to get home?