What movie is this that showed up unexpectedly instead of an internet advertisement?

I was watching short videos on a normal news website, and instead of showing a normal 30 second commercial it unexpectedly started playing a 1 hour (72 minutes I think) SciFi movie! The whole time it shows Advertisement at the bottom, but I just left the controls alone for fear they might interrupt viewing.

There was a normal feature length movie introduction giving names of actors but I didn't pay attention at that point. Later I discovered I couldn't back up and check them.

All I have are screen shots. I've cropped out the video player parts and collected some together, shown below. Perhaps this will help identify one of the actors, which would then help for title look-up. Japanese is spoken during some "bad guy" scenes.

Does this jog anybody's memory? I'd like to look up the film and find the actor and production credits.

The story starts with a guy having a nightmare, his "uncle" giving him a tranquilizer, going to high-school the next day, then a SWAT-like team enters the classroom and tries to take him into custody. He has unusual "powers" and escapes.

Question: What is the title of the film, how can I look up the actor and production credits? Any idea why this would have been shown to me randomly for free? (I'm browsing from Taiwan and advertisements are usually targeted to local viewers.)

Here is what was shown at the top of the screen. There's not much to go on; I've tried to sharpen but it's still difficult to read. It doesn't appear to name the movie though... 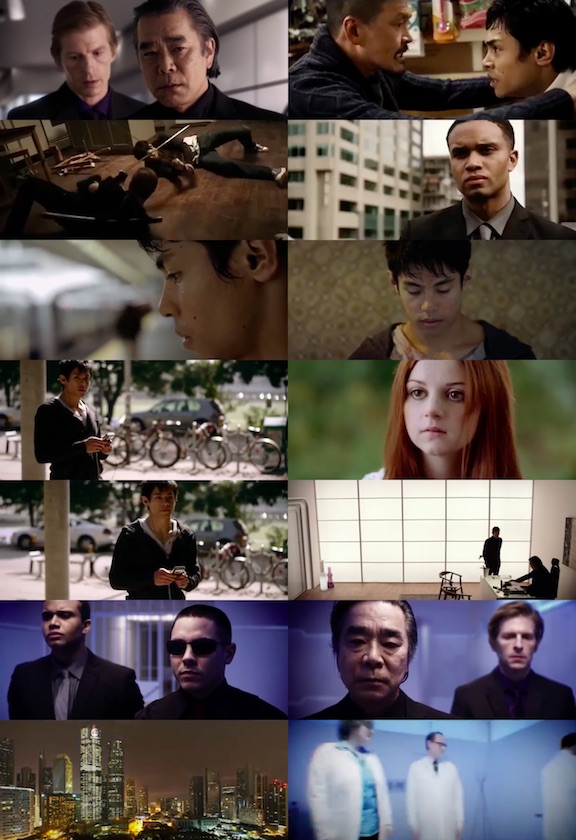 This appears to be Kill Order, a 2017 movie starring Chris Mark.

In the trailer, you can see a number of the points you describe, including waking up from a nightmare and a SWAT team coming for him while he's in class:

6
What is the name of the movie from 80's with ray cyclotron from observatory?
6
Movie from the 90s where the superhero gets the strength from the galaxy
7
Movie during "4:30 movies" that showed every Friday in NYC in the late 80s
2
Movie or tv scene with many species of aliens
13
Low budget D-list movie with werewolf, emo guy, and mystical girl of his dreams
18
Movie where a bereaved woman raises an angel to help her cross over
13
An animated sci-fi movie with a fully armoured antagonist and a pale looking child
10
French movie: a few people gather in a cold/frozen place; guy hides in locomotive and gets shot
12
Movie from the 80's/90's with a deadly virus that makes people spew virulent goo