How are the celebration shots of Coruscant explained?

At the end of Return of the Jedi, after the Death Star is destroyed, fireworks are shown exploding over many different worlds, including Coruscant. Since Coruscant was still "Imperial Center" and would not be freed by the Rebellion for several more years, how is this explained?

The event, known as Riot in Monument Plaza in the new canon, was added to Return of the Jedi for the 1997 Special Edition. The first book to address this event in the new canon was Aftermath. Coruscant citizens tore down a statue of the Emperor, but Imperial forces showed up and a riot broke out.

The head of the statue snaps off, goes rolling and crashing into a fountain. Dark water splashes. The crowd laughs.

And then: The whooping of klaxons. Red lights strobe. Three airspeeders swoop down from the traffic lanes above--Imperial police. Red-and-black helmets. The glow of their lights reflected back in their helmets.

There comes no warning. No demand to stand down.

The laser cannons at the fore of each airspeeder open fire. Red bolts sear the air. The crowd is cut apart. Bodies dropped and stitched with fire.

But still, those gathered are not cowed. They are no longer a crowd. Now they are a mob. They start picking up chunks of the Palpatine statue and lobbing them up at the airspeeders. One of the speeders swings to the side to avoid an incoming chunk of stone--and it bumps another speeder, interrupting its fire. Coruscanti citizens climb up the stone spire behind both speeders--a spire on which are written the Imperial values of order, control, and the rule of law--and begin jumping onto the police cruisers. One helmeted cop is flung from his vehicle. The other crawls onto the hood of his speeder, opening fire with a pair of blasters--just as a hunk of stone cracks him in the helmet, knocking him to the ground.

The other two airspeeders lift higher and keep firing.

Screams and fire and smoke.

According to Wookieepedia, Coruscant was not liberated from the Empire until the Galactic Concordance was signed. This part of the timeline is still being filled in by novels and the few details are in The Force Awakens Visual Dictionary.

This was a brief uprising which was quickly quashed by the remaining Imperial forces. The uprising was added to Return of the Jedi for the 1997 Special Edition and it has been referenced in the comic Mara Jade: By the Emperor's Hand and the X-wing books, in particular X-wing: Iron Fist. 2.5 years later, Coruscant was freed from Imperial rule as detailed in X-wing: Wedge's Gamble.

From the Wookieepedia on the Coruscant Uprising:

On Coruscant, several Rebel insurgent groups, including one of which future Wraith Squadron pilot Castin Donn was a member, retransmitted the news feed from a New Republic HoloNet broadcast showing the explosion of the second Death Star. The rebroadcast overrode the normal channels and went out on a wide band, ensuring that every personal comlink and holoprojector would show the footage.

Subsequently, billions of citizens began celebrating the fall of the Empire, and an armed uprising sprang out in several sectors. Imperial patrols were attacked in the streets, statues of Palpatine were toppled with explosives and skimmers and other Imperial symbols were desecrated by Rebels and Rebel-leaning civilians. However, in the midst of all the celebrating and rioting, Director of Imperial Intelligence Ysanne Isard ordered a massive crackdown on the rebellious elements in the city-planet's population and gave full power to the local military force to end the uprising and restore order to the system. The populace was eventually put back under control through military retaliation, with high death-tolls on the part of the insurrectionists.

Panel from the Mara Jade comic showing the Imperial crackdown after the uprising shown in Return of the Jedi: 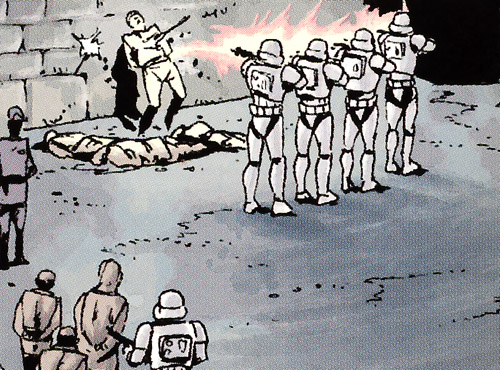 Castin looked around blankly, staring not at his felow Wraiths but at some point in the past. "The day the Emperor died--what were you doing?"

Face didn't have to think back. Most people recalled exactly what they were doing the moment they heard that Palpatine had been killed at Endor. "I was in civilian flight school on Loord. In class studying astronautics. Why?"

"I was in one of Coruscant's plazas. A little one, couldn't have held more than a couple of hundred thousand people, way up high where only a half-dozen buildings cast shadows down on it. The word spread like fire through an old building. The New Republic HoloNet broadcast was being rebroadcast on a wide band so that every personal comlink would pick it up. All holoprojecters were showing the second Death Star exploding.

"The crowd went crazy. Loyalists were turning white. Some of them were fainting dead away. Rebels and people with Rebel leanings were going berserk. Before very long, they were actually tearing a statue of Palpatine down. A big one. It took cables and skimmers to knock it over." Castin shrugged. "And then stormtroopers came."

"If you want to call it that. They opened up on the crowd pulling down the statue. And their blasters weren't set on stun. You could smell the burning-meat odor all over the plaza. I was right next to a young mother who took it right in the head, I grabbed her baby on the way down so he wouldn't be trampled in the stampede." He shook his head, his expression bleak, and fell silent.

Face said, "The Imperial HoloNet wouldn't have transmitted the news of the Emperor's death over normal channels like that. Not before they'd had time to sweeten up the story and turn it into some sort of Imperial victory."

"So someone else, someone technically proficient, had to have intercepted it and rebroadcast it like that. You?"

Castin nodded. "My group was one of them, yes."

Note that in Legends, Coruscant was liberated in 6 ABY (covered in the novel X-Wing: Wedge's Gamble).

I do not have a copy of the film with commentary but I would assume that is likely to be an additional place to find George Lucas's comments about that scene.

21
Which planets were shown during the celebrations at the end of Return of the Jedi?

15
How do the Death Stars retain atmosphere in the landing bays?
6
How many innocents died on the second Death Star when the rebels destroyed it?
37
In “The Force Awakens,” how did the First Order obtain their power and resources?
9
How did Darth Vader's helmet survive Return of the Jedi?
21
How did the First Order build Starkiller base so quickly?
80
In Episode VI, what did the good guys really accomplish since the bad guys are back stronger in Episode VII?
9
Why is time in the galaxy far far away described by reference to Yavin rather than Endor?
9
How many prisoners did Luke kill on the first Death Star?
21
Which planets were shown during the celebrations at the end of Return of the Jedi?