Short story about a fantasy creature zoo with a centaur man

A long time ago I read a short story anthology. One of the stories was about a man who had been injured and they'd rebuilt him as a centaur but he had to live in this zoo of fantasy creatures and have sex with patrons. In the story, he has sex with a female patron and female centaur at the same time. He breaks his leg at the end of the story trying to escape. It was an old book. Print.

The story is "Elfleda" by Vonda MacIntyre. The story is just as you describe it - the main character was injured and remade as a centaur, along with many other creatures like fauns, nymphs, pegasus and mermaids, and lives in a large zoo. Occasionally their masters arrive and "play" with them, which usually ends up in an orgy. He is desperately in love with Elfleda, a unicorn-centaur, and becomes jealous when she goes off with an ugly "master" boy. He does have a four-way eventually, and at the end tries to escape but falls, breaks his leg, and is killed by the masters. 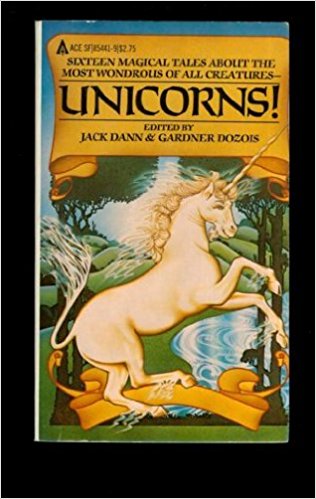 Not the answer you're looking for? Browse other questions tagged story-identification centaurs or ask your own question.

9
Short story or book about a space crew on a broken ship who were capturing alien animals for a zoo
8
Science fiction anthology, possibly called Monsters (or Creatures or Dragons)?
13
Short story about a three eyed being in a two eyed world
10
Short story “trash” in SF or Fantasy Anthology
10
Name of short story in which a woman and an alien have sex because they're bored
5
Looking for science fiction short story author wrote a series about 'gates' - teleportation devices
6
Fantasy novel about a world with mechanical dragons
3
Horror/fantasy short story about a strange man in a (magical?) cabin in the woods