Why wasn't this TNG space creature hailed before they fired on it?

In "Galaxy's Child," the Enterprise comes across a space-dwelling organism that is with child. The organism fires a stream of radiation at the ship, and, to defend himself, Picard orders the firing of phasers. This kills the creature, much to the chagrin of the captain.

Why not try hailing it first? It may be unlikely to succeed, but it can't hurt to give it a shot. After all, in an earlier encounter the Calamarain, a species even less like humans than "Junior's" species, attempted to communicate with the Enterprise, though its message could not be translated on the spot. 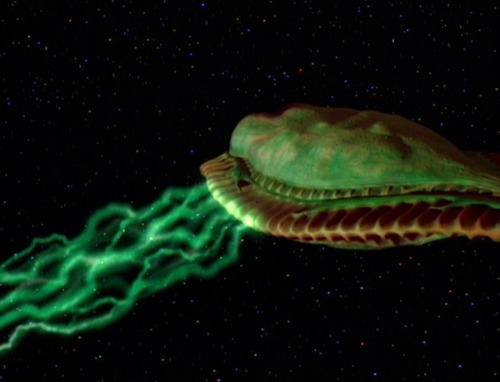 The original script goes into a little more detail that didn't make it into the final episode. In short this is part of Starfleet's established procedure for dealing with these sorts of situations. The fact that the phasers (on their lowest power setting) had such a dramatic impact was entirely unexpected and is considered by Troi to be little more than an accident, albeit a tragic one.

With less than a minute before the radiation levels became lethal, Picard decided to go with Starfleet's safe option; firing what should have been, in essence, a warning shot to get the creature to back off.

TROI: Captain, everything you did was consistent with established Starfleet procedures... what happened was an accident... unavoidable...

Picard glances at her... barely acknowledges... rises to go to his Ready Room...

PICARD: The Bridge is yours, Number One.

They didn't have time. Lethal radiation exposure was to occur in one minute. The captain ordered a phaser burst at minimum power intended to be a smack on the nose to allow the Enterprise the chance to escape, it was not meant as a killing blast

DATA: Radiation levels dropping back to normal, Captain. Energy patterns are breaking down, sir. The radiation signature is no longer stable. (the once-colourful alien goes dark)

PICARD: We're out here to explore, to make contact with other life forms, to establish peaceful relations but not to interfere. And absolutely not to destroy. And yet look what we have just done.

TROI: Captain, everything you did was consistent with established Starfleet procedures.

21
Why didn't they make a new TNG movie after Nemesis?
10
Is this Patricia Tallman in the TNG episode “Half a life”?
7
Why wasn't Dr. Timicin's final work accepted?
9
Can you identify each character and spacecraft in this Star Trek TNG 30th anniversary poster?
10
What TNG episode is this clip of Jean-Luc Picard wearing a suit from?
84
From which Star Trek TNG episode/movie has this famous facepalm image been taken?
4
In Star Trek: TNG, why was Crusher’s labcoat blue?