I'm trying to recall the name of a series, likely published from 2005-2010, which went something like this:

An awkward, teenaged boy protagonist (possibly slightly overweight?) somehow enters a world of fairies and demons (or dark fairies or something like that). It may have to do with him finding the fairy prince in his world after school and helping him recover. There's also a gruff old man in the real world who is his friend.

He goes to the fairy world to help the prince. The princess is named Blue(??) and they have some eventual romance later in the series. They all have some shenanigans probably involving court intrigue of some kind - Uncle is an evil fairy, working with the enemy, etc, some plot they uncover. Protagonist returns to our world but eventually goes back to FairyVerse.

The interesting thing about these books is the fairy world, which is semi-steampunk, and has weird villains doing forbidden sorcery or something along those lines, and devices to travel between dimensions. I think the narrative switches between Protagonist and Fairy Prince somewhat.

Any help is greatly appreciated!

story-identification young-adult fairy
Share
Improve this question
edited May 30, 2018 at 7:34

This is probably Faerie Wars by Herbie Brennan. 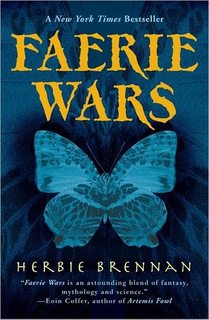 When Henry Atherton helps Mr. Fogarty clean up around his house, he expects to find a mess and a cranky old man; what he doesn't expect to find is Pyrgus Malvae, crown prince of the Faerie realm, who has escaped the treacherous Faeries of the Night by traveling to the human world through a portal powered by trapped lightning. An egomaniacal demon prince, greedy glue factory owners Brimstone and Chalkhill, and the nefarious Lord Hairstreak, leader of the Faeries of the Night, all dream of ruling the Faerie realm and are out to kill Pyrgus.

Enlisting the help of his sister, Holly Blue, and his new friend, Henry, Pyrgus must get back to the Faerie world alive before one of his many enemies gets to him instead. But how many portals are open, and can Pyrgus find the right one before it falls into the wrong hands?

Conjuring scenes filled with vivid color, unforgettable detail, and fearless characters, author Herbie Brennan brings readers to the Faerie world, where nothing is ever what it seems and no one can be trusted.

Not the answer you're looking for? Browse other questions tagged story-identification young-adult fairy or ask your own question.