I saw this interesting movie few years ago online, have lost it, want to re-visit. It has elements of fantasy and magic within the main theme. English language, story set in England, made within last 20 years (possibly more recently), independent film but well made - not mainstream Hollywood at all. Feels like a Channel 4/BFI type production. For 90% of the film there are only two actors and the interest (beyond a decent fantasy) is in how their personalities come through and a relationship develops between two opposite poles.

The bereaved woman, well dressed, articulate but nervous meets a scruffy man at a train station who appears to be a 'new age' type. They taxi in daylight to a large house which she has rented for several months. The old building is in significant grounds, empty save for the two of them and looks secluded. Save for the odd couple, everything has a sense of normality to this point like a good Stephen King novel.

A discussion begins with the man professing to be a white witch. He suggests that he can open a gateway to summon an angel who will re-connect the woman with those passed. He suggests this is a long, arduous and potentially dangerous process and once started (the door is open) it must be taken to conclusion. He warns her that some aspects of the journey will challenge her mentally and physically. She agrees despite these warnings. The man seals the house.

The tension in the film is that you never know if this guy is genuine, a con man taking advantage (he is getting paid) or something worse - a satanist maybe. Or in fact, if the woman has had a nervous breakdown and is living out a sad fantasy - the direction is clever and you are given enough plausibility to keep you attached, even when he strips off and announces that they must have sex together within drawn magic symbols on the floor.

Note: It never gets too dark in the representation on screen - it's more of a well made psychological thriller / fantasy with interesting cinematography than a midnight B horror flick although there are shock moments.

Spoiler alert: At the end of the film as tension and credulity are stretched to their limits,

the man is fatally injured and the woman collapses. The camera pans to show the angel arriving in all its glory and blinding light. Everything was in fact, true.

If we can identify the film it's well worth a watch and I would love to read the novel (assuming it is based on one).

This is the 2016 Irish film, A Dark Song. It does not seem to be based off of a book, although the ritual used is based off of The Book of Abramelin, a 17th century grimoire. 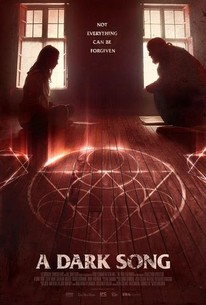 A bitter Sophia rents an isolated house in rural Wales, in order to help convince short tempered, occultist Joseph Solomon to lead her in a grueling, months-long rite in the old mansion, which will eventually summon her guardian angel. They will then both be allowed to ask the angel to grant them a special favor. A visibly grieving Sophia will ask her angel to be able to speak to her dead seven year old son. The serious and demanding Solomon explains to Sophia that once they begin, if they leave the house before the ritual is culminated they will be in grave peril. He says she must spend months of punishing exercises, in which they will be dealing with real demons and angels; she agrees. Over months she complies methodically with dozens of harrowing and painful exercises, but refuses to do the forgiveness ceremony. Grudgingly they get to know one another.

However, after months a frustrated Sophia complains that it’s taking too long, and Solomon accuses her of impairing the ritual by not being honest about something. She admits that the real favor she will ask the angel is revenge upon whoever kidnapped and killed her son. That night he awakens her to insist that because her dishonesty has made her unpure, a re-birthing ritual in the tub is required. However, he drowns her, says a spell, and revives her with CPR. Angry afterward in the kitchen, she pushes him and Solomon accidentally falls on a large kitchen knife, impaling him in the side. As she treats the wound with their meager medical supplies, he explains that this is a sign that the ritual is beginning to work, and that she will have her revenge. He discloses that he will ask the angel to be invisible for the rest of his life, in order to be away from people “to gain some quiet before the howl.”

As Solomon soldiers on with the wound, insisting he is just fine, Sophia begins seeing and hearing dark and menacing presences in the house, including the pleading voice of her son. As Solomon's wound becomes increasingly infected, he begins to fail, and eventually dies in his sleep. When she goes back to his books for further instruction, everything has been crossed out, unreadable. Sophia steps beyond the perimeter of the house, but her car won't start. After walking a lengthy distance down an empty road, she is disturbed to realize that she has arrived back at the mansion.

She re-enters to discover various kinds of demons appearing and re-appearing. At one point, one smashes her over the head, and they drag her to the basement, tormenting her, and cut off a finger, as she tells them how sorry she is. However, they retreat as a brilliant white light fills the house. She finds a massive, beatific angel in armor awaiting her; Sophia asks it for the power to forgive, and it smiles. Later she performs a water burial of Solomon in a nearby pond, and drives away.

It was one of my first matches for film bereaved woman summons angel but probably because I do so many of these searches.

19
Movie or TV film - full story happen on a military starship,
7
Identify This Movie: Robed creature sent by white-noise bad guys to abduct little girl
5
Movie where nun raises a girl from an egg who is then kidnapped
9
Movie about a woman and her young daughter; a person they know killed her in her past life
11
Movie where a woman is running away from a plant creature which rips her shorts?
11
Live action sci-fi film on full body transplantation, unwilling victims end up in ape body, leading scientist betrayed
7
Space sci-fi movie where a woman goes to space and loses her memory
11
Old movie (1950?) where a ghost protects a woman from her husband