Why did the bank manager keep the grenade in his mouth?

As you can see from the original video, the bank manager could see clearly that the string of the grenade was attached to The Joker and I'm struggling to understand why he kept it in his mouth.

There wasn't any glue and not only was the Joker not looking at him but there was ample time for him to make a rational decision and spit it out before the bus went away (enhancing his chances to survive). 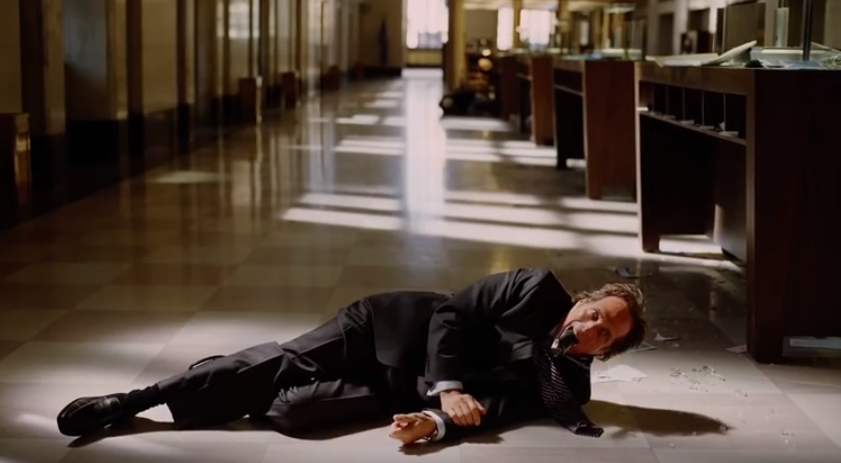 The film's official novelisation suggests that he was simply in shock at this point and incapable of rational thought. Blood loss, a massive chest wound and coming face-to-face with a psychopath aren't things that are conducive to quick thinking.

Bozo jammed a grenade with a purple thread knotted around the pin into the man’s mouth.

Bozo yanked off his mask. The manager’s eyes widened. He was looking at another clown face, one far more disturbing than any of the masks: white skin, green hair, a mouth horribly scarred beneath a red slash of makeup.

The scarred clown rose and strolled toward the bus, the thread attached to the grenade unraveling from the purple lining of his jacket. He climbed into the bus and shut the rear door, trapping the purple thread.

Additionally, the grenade is large enough that it would have locked his jaw, making it (like the proverbial nut) all but impossible to spit out, especially for someone with a chest wound.

There's also the fact that from his perspective it's not that easy to see that the grenade still has the pin in. He might just be wondering why the Joker is trailing a thread without realising what it's for until it's too late.

Not the answer you're looking for? Browse other questions tagged dc nolan-batman-trilogy the-dark-knight or ask your own question.