What was the Marauder’s plan?

In the Solo Star Wars Story, during the train heist scene, the Marauders show up and make a play for the coaxium. Their speeder bikes don’t seem be capable of lifting the train car or going up against the seek & destroy droids, but nevertheless, there they are: blasting away at the cables attached to the only ship capable of making off with the loot. Only one marauder is sent onto the ship, who immediately attempts to kill the pilot of the ship sending it crashing out of control. It seems they were more concerned with just spoiling the heist than actually making off with the loot. Was there ANY cohesive plan on their end to actually obtain the coaxium?

I think their plan was just to destroy it and keep it out the hands of Crimson Dawn. If I remember correctly, I only seen the movie once, during the train scene, the leader of the Marauders simply starts to cut off the cables before the speeders are even latched to the container, maybe hoping it will just plunge in to bottom of the mountain. The speeders started to latch in to it after realizing the cargo ship was not taking out of commission, thanks to Han, so they were probably just trying to derail it at that point. At least that’s how I interpreted it.

The 'marauders' started with seven speeder bikers. Three were destroyed and the remaining four bikes appear to be just powerful enough to lift the load with their harpoon cables but not to control it after it starts swinging out of control. 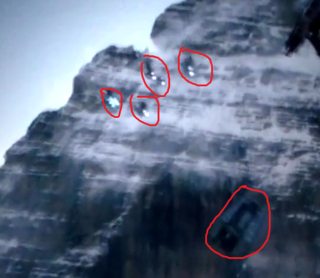 We can reasonably assume that with six or seven bikes (and fewer distractions) they would have had more than sufficient lifting capacity to take the train carriage directly into the air and airlift it to a nearby outcropping to unload the precious unobtanium before retreating to space in their spaceship.

The dangerous warrior ENFYS NEST suddenly appeared, flanked by a crew of Cloud-Riders on heavily modified speeders called swoops. They wanted the coaxium, too!

A train car full of coaxium was too big a score for Beckett to go down without a fight. He and Enfys battled on top of the train, both trying to attach their own cables to the car to pull it away.

21
What was Dooku's plan for the Battle of Coruscant?
7
What was the "plan" to which Nute Gunray was referring?
5
What was Obi-Wan's plan on Mustafar?
10
What was the reasoning behind this action in Solo: A Star Wars Story?
8
What are the scars on the face of Dryden Voss?
7
Where was Beckett heading after leaving with the Coaxium?
5
What was Palpatine's original plan with the Naboo invasion?
10
Why was this droid's "death" permanent?
0
Technically speaking, was the Millennium Falcon ever used for piracy?