Did George Lucas ever say in an article that Anakin knew his child lived?

I'm searching for a possible quote by George Lucas from years ago. It can be hard to find what Lucas has said over everyone else's opinion.
When I read that Lucas said Anakin knew of a child and waited for him to grow so he could help him destroy the Sith Sidious I saw Vader in a new light. Everything makes sense now.

Can you help me provide any evidence that Anakin/Vader did know he had a child somewhere?
Have you seen the article?

As far as I can tell, any such statement Lucas may have made was never reported in a way that preserved it to be available later. This is not to say that he never considered it as a possibility, but if he did it was during a very short time period, and in that period he was quite busy and didn't do many interviews, so such plans were likely never recorded by anyone.

In coming to this conclusion, I rely on the meticulously researched book, The Secret History of Star Wars by Michael Kaminski. In this book, Kaminski chronicles the changes in story between different versions of Star Wars, and highlights the changing story Lucas tells about how they came to be.

Kaminski's compelling conclusion is that, despite Lucas's repeated assertions to the contrary, the idea that Darth Vader was Luke Skywalker's father was never contemplated until Lucas started work on revising The Empire Strike Back after Leigh Bracket's unfortunate death in early 1978. Furthermore, other than a single instance of a fanzine getting hold of two leaked scripts, one of which included the idea and the other of which didn't, the idea wasn't public knowledge until the film was released. This means that the earliest such a statement could have been made was 1980.

Between 1978 and 1981, Lucas made a number of statements about how many films he planned to make. While at first he suggested making twelve films, by the time he had finished scripting Empire he had settled on the idea of 9, and retitled the original Star Wars as A New Hope, attaching the Episode IV designation to it. This occurred after he had decided to make Vader Luke's father, and decided that a prequel trilogy focusing on how "Annikin" Skywalker (as the name was spelled in early drafts) became Vader would be a good idea. His plan at the time seemed to have been to finish Episodes V and VI, then move straight on to production of Episodes I-III before returning to Episode VII to continue a story of how the Republic was rebuilt after the collapse of the Empire.

He did a lot of interviews around this time, making statements about his plan for an epic series of 9 films, and one of the things he said at this time was that episode III would end with Luke Skywalker being 3 years old. It seems like a logical conclusion that at that point in the development process, Lucas planned for Vader to have known all along that he had a son. But he wasn't going into details in public because he didn't want to spoil the big reveal.

However, he knew that there were certain commercial realities that might make filming an Episode VII problematic -- most notably, availability of actors: he was already having trouble persuading Harrison Ford to return for Episode VI, and Hamill and Fisher were only contracted for 3 films so he would be concerned that he might have trouble with them in future too.

He came up with an interesting solution to this potential problem: he inserted a throw-away line that would allow him to invent a new character if he wanted. He had Obi Wan say "That boy is our only hope," to which Yoda responded: "No. There is another." The evidence suggests that at the time the film was made, there was no firm plan who the "other" would be.

But then, during the very stressful process of filming Empire, Lucas abandoned the idea of a sequel trilogy. He started making statements that there would be 6 films in total. This meant he had to resolve the question of who the "other" was in Episode VI. In early 1981, he resolved it by adding the idea of Leia being Luke's sister in a early draft of Return of the Jedi. But this immediately required changes to the story: there was no way Vader could possibly know he had children if one of them was being hidden as a prominent member of the royal family of an important planet. Leia could only have avoided detection if he never knew she was there to find. So Luke and Leia had been hidden from birth; in fact, early drafts of Return of the Jedi made clear that their mother had gone into hiding before Anakin even knew she was pregnant.

Therefore, Lucas could only have made this suggestion between the release of Empire Strikes Back and early in the process of writing Return of the Jedi ... but during this period he was busy: he was working heavily on Raiders of the Lost Ark and was actively avoiding publicity. So it seems unlikely that, even if he did apparently at one point plan this, he ever made a public statement to the effect.

What you are asking about plain and simply does not appear to exist, I have searched extensively for it on every major internet search engine and found nothing. I also happen to own every book that would possibly have some reputable information about this or I have at least read it, and I have seen and own every documentary on the making of these films, and own every version of the films released on DVD and Blu Ray, so no I don't think we can help you find that information.

However one might try even if we did track down the quote, it is not as you said it "the truth". Whether Lucas stated it or not it's irrelevant as far as that's concerned. It is not canon, and it never was.

Although I suppose it might have been up in the air whether he knew or not prior to the release of Star Wars: Episode 3 - Revenge of the Sith, but since then it absolutely is not. Or else the saga would not make sense at all, Darth Vader remains loyal to Sidious only because he believes that he killed Padme. I know a lot of people blocked this stuff out but it's plain as day in the films.

However, since the Disney acquisition this particular bit of history in the SW Universe has been clarified with a series of comics taking place between ANH and TESB. As if it were not plainly obvious just watching the films, he did not learn about Luke until after the Death Star was destroyed when he personally tracked him down and with help learned his true identity, thus learning he had a son. This is covered in the comic book series Star Wars: Darth Vader in issue #6. 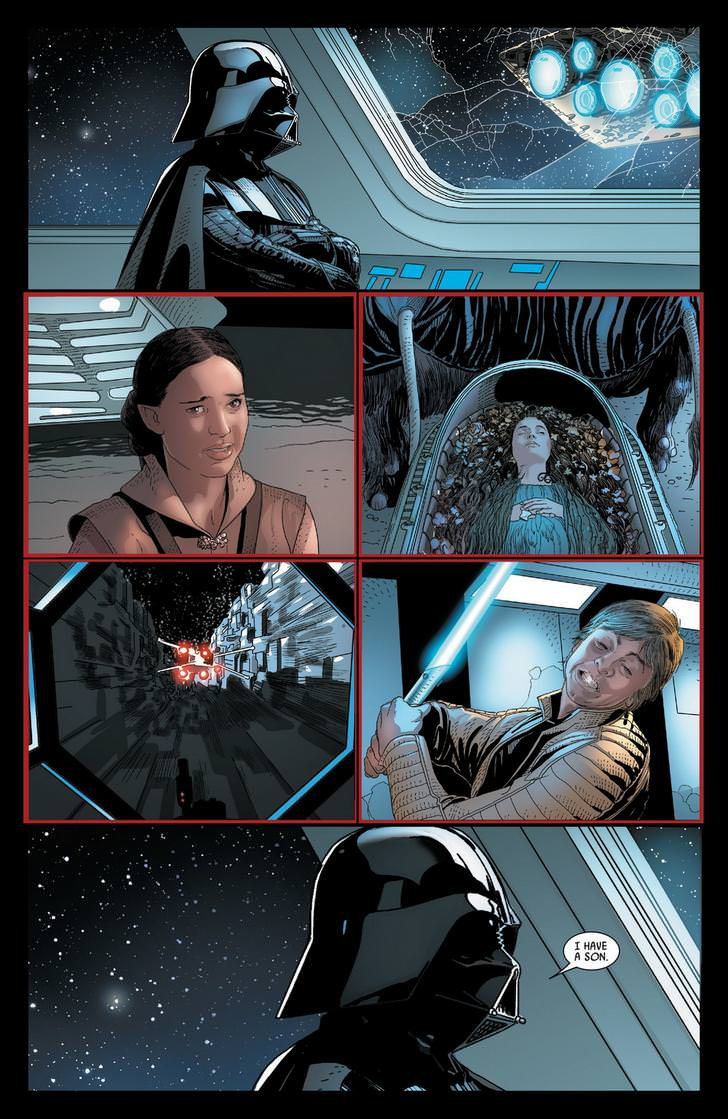 In other words, Darth Vader was lying to his master in TESB, he was keeping information from him and he had his own plans and schemes for galactic domination. Afterall, killing one's master is what Sith do, that's actually how the order is continued. They kill their master and only then can they "officially" become the master and take on an apprentice. Vader was no different and had plans of his own to do so.

Note: When Disney bought Star Wars they reworked the canon and officially made all old expanded universe materials "legends". Today canon "the truth and not opinion" only consists of all of the main series films and Star Wars anthology films, the Clone Wars and Rebels cartoons, and all books and comics released after the Disney acquisition.

108
When and how does Vader learn that Luke is his son?

32
Why does Palpatine refer to Luke's father as Anakin?
36
Was Luke turning into a Sith?
4
Did George Lucas ever suggest that he was influenced or inspired by Tolkien?
46
Did George Lucas ever meet Gene Roddenberry?
6
Is there evidence that Lucas intentionally introduced similarities between Episodes I and IV?
18
Is there any evidence that Palpatine cared about - or liked - Vader?
55
Why did Palpatine pick 'Vader' as a name for Anakin?
6
Does Padme know the name “Darth Vader”?