What is Wolverine's immigration status in the USA?

In X-Men Origins: Wolverine, we find that Wolverine (Logan) is a long-lived Canadian who immigrated to the USA sometime between 1845 (the date of the first scene) and the US Civil War. Wolverine fights in several US wars, including the US Civil War, WW1, WW2, and Vietnam, before finally being court-martialed in Vietnam.

What is Wolverine's immigration status in the USA?

It makes sense that he has forged paperwork (driver's license, birth certificate, passport, etc.) anyway to hide his long life, so it makes sense that it could double to hide a lack of immigration status, but that doesn't prove anything.

I do recognize that enforcement of immigration regulations is not always universally consistent, so if Wolverine is actually out-of-status but this is explicitly ignored by US immigration enforcement officials due to his powers and/or potential, that's an answer!

According to the Official Handbook of the Marvel Universe (Vol. 1), Wolverine is a Canadian National living in the United States.

Notably he was married, albeit briefly, to Madam Viper. She appears to also be permanently resident in the US so it's possible that she was able to sponsor a green card for him. Alternatively he may have simply claimed to have been resident long enough to take advantage of one of the many "grandfather" amnesties and Acts that allow illegal residents to claim residency. 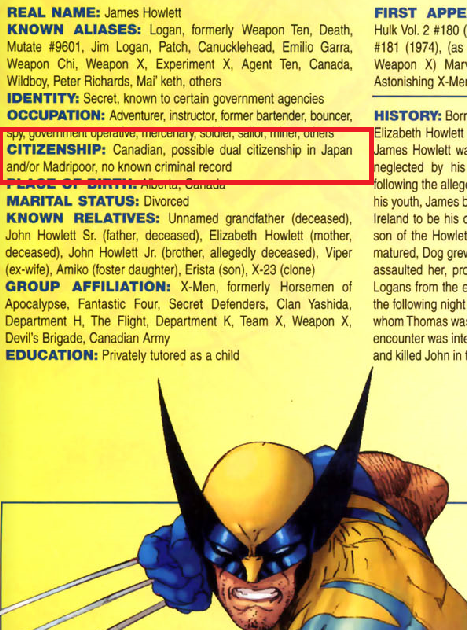 Not the answer you're looking for? Browse other questions tagged marvel x-men-cinematic-universe wolverine x-men-origins-wolverine or ask your own question.