How did the Mi-Go fly through space?

The Mi-Go were supposedly able to survive a hard vacuum, which I can believe due to their alien physiology. However I'm wondering how they managed to propel themselves, with those stubby wings of theirs.

The Mi-Go were supposed to use their wings (extruded from a gelatinous mass on their back) only in space and only when beating against the aether, a previously believed mystical medium (theorized in early Greek mysticism but remaining a popular idea until the late 1800's) that filled the region between the stars and planets.

The "Mi-go" are large, pinkish, fungoid, crustacean-like entities the size of a man; where a head would be, they have a "convoluted ellipsoid" composed of pyramided, fleshy rings and covered in antennae. According to two reports in the original short story, their bodies consist of a form of matter that does not occur naturally on Earth; for this reason, they do not register on ordinary photographic film. They are capable of going into suspended animation until softened and reheated by the sun or some other source of heat. They are about five feet (1.5 m) long, and their crustacean-like bodies bear numerous sets of paired appendages. They possess a pair of membranous bat-like wings which are used to fly through the "aether" of outer space (a scientific concept which is now discredited). The wings do not function well on Earth. Several other races in Lovecraft's Mythos also have wings like these. --Wikipedia Migo Entry

Aether was a form of mystical air that could be affected by creatures who lived between the stars like the Mi-Go and their other extra-planetary interstellar races. The concept of aether, of course, has been discredited since these stories were writing in the late 1890's to 1930's. 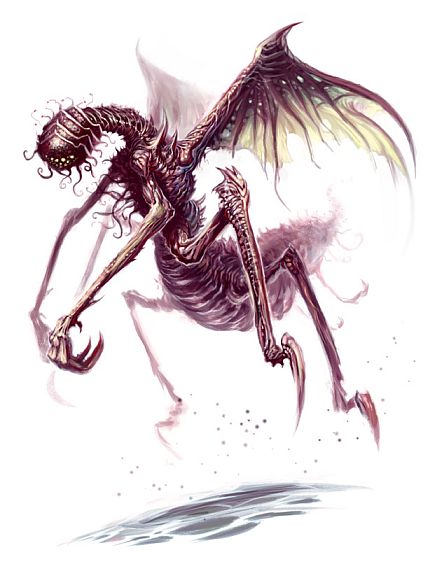 The Mi-Go did not live in our solar system but had a base on Pluto where they would steal human scientists to help them with their work. The human scientists would have their brains removed from their bodies and shipped to Pluto in a life support canister which allowed them to remain alive and communicate with the Mi-Go. Their human quality of life, however, was greatly reduced.

Its is a well know FACT that the membranous wings are made of a form of matter not found in this universe, they could catch and manipulate all 4 forces, weak, strong, electromagnetic, and gravitational to create thrust... DUH

4
What happens to the black stone in Whisperer in the Darkness?
4
Why did Randolph Carter struggle to overwhelm Zkauba?
63
Where did the phrase "Iä! Iä! Cthulhu fhtagn!" first appear?
11
Did Lovecraft ever explicitly mention any enemies of the Cthulhu?
12
Seeking Name of Lovecraftian Short Story About Ancient City In The North
6
How difficult is it to get access to the Necronomicon?
5
How many wings did the Elder Things Have?
5
How old are the Old Gods in the Cthulhu Mythos?
6
Was the illustration of the "Primordial One" in the AD&D Deities and Demigods based on the one from Barlowe's Guide to Extraterrestrials?
19
How large is Cthulhu?