Why so little steam in steampunk?

In the vast majority of discussions of Steampunk work, in art and culture I see more references to clockwork items than steam-powered paraphernalia. It seems as though the term is more or less synonymous with Victorian Retro-Futurism. I am aware of the term clockpunk as it's separate thing, but it seems to forever be being merged with steampunk. From Wikipedia's article on Cyberpunk deritives:

Clockpunk is a subgenre of speculative fiction which is similar to steampunk, in that it portrays advanced technology based on pre-modern designs, but the technology used is based on springs and clockwork

Does steampunk have some over-arcing definition that incorporates these 'sub-genres' or is it simply being mis-used as a term? Which term is the original and which is the derivative (if any)? 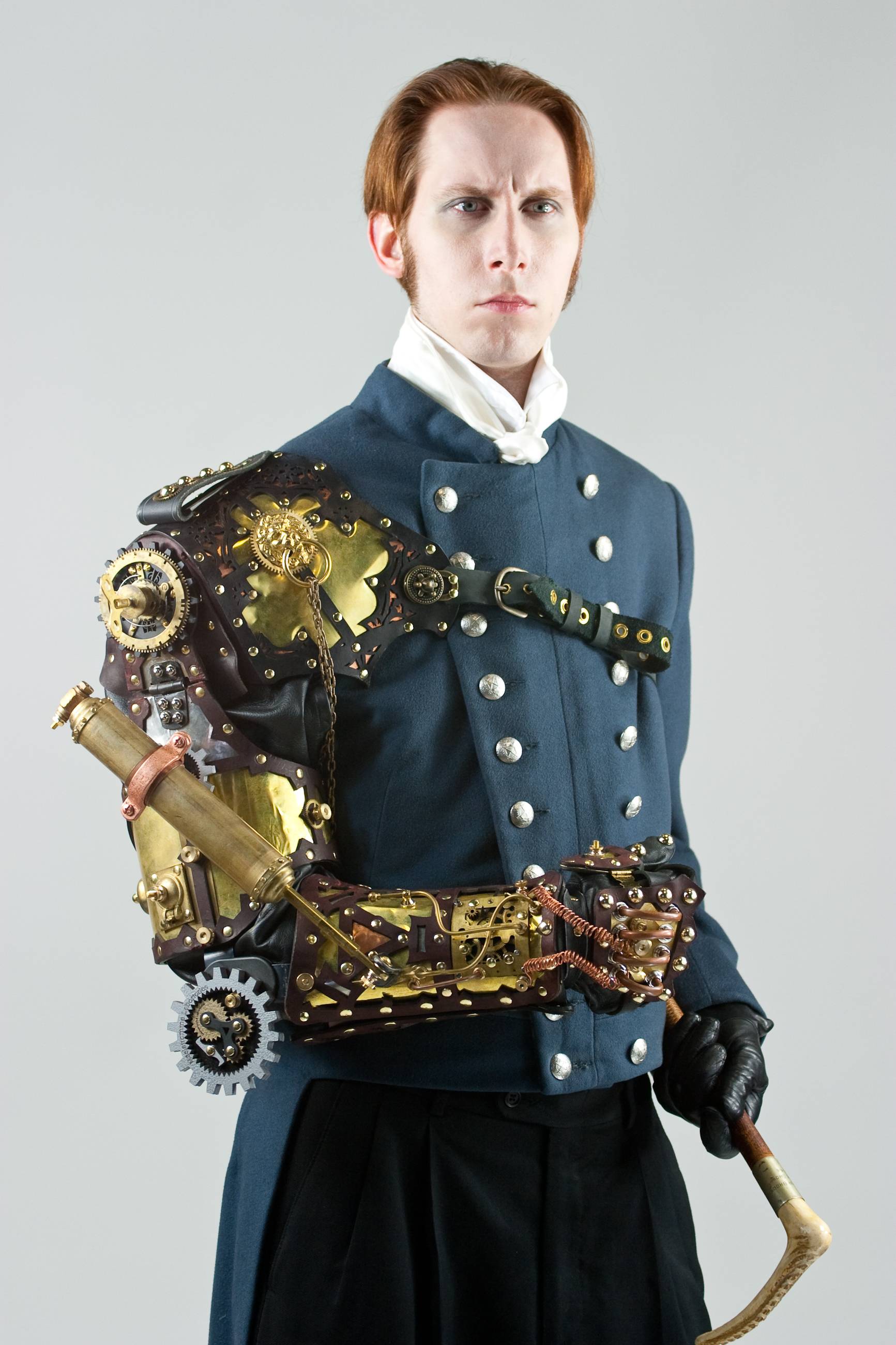 A 'Steampunk' arm fitted for a man, seemingly powered by clockwork.

It is steampunk because steam power is the predominant force. Really though, it's just a world without electricity. The term "steampunk" refers to an anachronistic future imaginable by early Victorians (ie. no electricity). The style is not always Victorian, but borrows from that particular age. There are "Wild West" style Steampunk works (Wild Wild West). To people of this age, steam was power, and imaginations for tomorrow were based on steam much like our own imaginations are built on electric and nuclear power sources.

Keep in mind that it is difficult to model human-mounted systems that are completely based on steam. Vehicles will always be powered by steam in a steampunk work.

Take a closer look at that clockwork gentleman's arm, there is a cylinder. The cylinder provides the power to the arm. Cylinders are powered by air (steam). It is usually obscured or hidden because steam power is typically bulky... but make no mistake, steam is incredibly common in steampunk.

What Steam Power Means in SteamPunk (The SteamPunk Paradigm):
As the comments suggest, Steam Punk does not require that everything in it is driven by steam. It is a paradigm shift. Our world is powered by tiny electronics. The steam powered world is one where the functional engineering of a device dominates its bulk and thus its design.

For this reason you see fashion borrowing from engineering much like the celebrated cars of today inspire sleek looks, the complex magnificence of a road vehicle driven by steam, huge gears, pipes, and other systems drive a dark Edwardian laboratory of style.

It is not simply Victorian or Edwardian, it is the highly engineered extrapolations of that age IF electricity had not been.

Keep in mind that SteamPower doesn't necessarily mean that a steam engine needs to be mounted in order to utilize it. Steam engines will often be used to pump air into a canister for later use of that pressure. Air cartridges take the place of batteries, fuel or electric engines are replaced by steam engines.

This power was still generated using Steam in some way.

Clockwork "Power":
Clockwork "power" is driven by wound springs or falling weights. The clockwork look is typically attributed to the complex force delivery method. Saying that something is "powered by clockwork" would imply that there is some kind of wound spring, and although there are no real pipes visible in the image, the only force delivery system visible originates at the cylinder that runs on compressed air.

An other possibility is that the power of his other appendages is diverted and used to power that one arm, this is unlikely given the apparatus type.

The large number of gears is a force delivery method, and if there is some kind of wound spring somewhere, then sure, it's not steam powered, but it could certainly come from a world where steam engines exist, but electricity does not.

If the arm you see was completely clockwork, the power must come from some kind of wound spring. This jives just fine with steampunk as it does not involve electricity. Having said that, I'm not sure why there are so many wires involves in that particular outfit, likely to look cool.

You will notice pipes of some kind in all of them, intended for air pressure operations.

The theme is that electricity has not been invented but technology grew on without it, so everything is made to look Edwardian, which roughly correlates with the steam age.

Steamboy is an excellent SteamPunk movie, and most of it is about people trying to make a small "steam reactor" or "steam battery" that basically has tons of air pressure in a small ball. The end credits eventually show one of the characters holding a lightbulb, signifying the end of the steam age.

The entirety of the quote you gave from http://en.wikipedia.org/wiki/Clockpunk#Clockpunk

Clockpunk is a subgenre of speculative fiction which is similar to steampunk, in that it portrays advanced technology based on pre-modern designs, but the technology used is based on springs and clockwork, and is usually set during the Renaissance, in the vein of Jay Lake's novel, Mainspring,[24] and Whitechapel Gods by S M Peters.[25] The term was coined by the GURPS role playing system.

As to why you see so much clockwork in steampunk - clockwork is more wieldy in that it can be used in small mechanisms. Steam is really only appropriate for larger mechanisms that can afford the overhead of a firebox, water reservoir, etc.

The term steampunk was coined by K.W. Jeter, and right from the start, steam was a reference to the dominant technology of the era depicted in an alternate history, not to a technology that must appear in the work. Steampunk really means Victorian-era punk.

Personally, I think Victorian fantasies are going to be the next big thing, as long as we can come up with a fitting collective term for Powers, Blaylock and myself. Something based on the appropriate technology of the era; like "steampunks", perhaps...

Clockpunk is a later coinage. It tends to refer specifically to works that rely heavily on clockwork.

I personally think that the steampunk community discovered steam engines are really not aesthetically pleasing and very unwieldy, not to mention the dangers of steam-involved gadgets. So the look is still steampunk (based on a the Victorian/Edwardian steam-era) only the technology has moved to clockwork for most parts.

Not the answer you're looking for? Browse other questions tagged terminology history-of steampunk or ask your own question.

26
What is the precise definition of 'Steampunk'?
16
Name of Steampunk novel with walking cities
31
What does punk in steampunk mean?
5
Why has the octopus become the representative animal of the Steampunk genre?
6
Steampunk book about alternate universe World War I
3
Short Story - Underground Dystopian possibly Steampunk
5
Why is steam power acceptable to the ruling Catholic Church in Pavane, but not electricity?
3
Stephen King and steam/diesel/cyber-punk