Is obesity ever addressed in Star Trek?

I was pondering, as I am wont to do, and it struck me how I could never recall anyone being overweight or obese in Star Trek. As it is such an issue today, and has been a major one issue for the last 10-15 years, I was wondering if it was ever addressed in Star Trek?

I found data for levels of obesity going back about as far as Star Trek has run for, and I can understand why it may not have been addressed in ToS, as that show was primarily focused on finding new and interesting species, planets and conflicts. But later on, during TNG, and beyond it feels like the show became more about the characters’ development and addressing personal issues the audience could relate to. Around this time too, obesity became more prevalent in the general populace.

I'd have imagined with the development of the replicator as an instant-food creation device, obesity levels would have risen considerably, even if only temporarily.

Furthermore I can see that Starfleet may not want physically unfit individuals serving, but there are, at least in DS9, plenty of civilians shown who would not be subject to those (if any) regulation.

I understand that there various other explanations for obesity than over-eating, including epigenetics, pollution and lack of sleep. Some of these I could imagine could be tackled in the Star Trek utopia, but not all of them. Even so I could imagine it would be addressed in passing.

As far as I can remember - not directly, no. Remember, in the vast majority of all the live-action series, the human characters are part of Starfleet, a semi-military organization that surely would have guidelines for how fit its members must be:

During Kirk's physical in 2366, Dr. McCoy noted that his weight was up "a couple of pounds," so he changed Kirk's diet card. (TOS: "The Corbomite Maneuver")

As for non-humans, here's one such fellow: 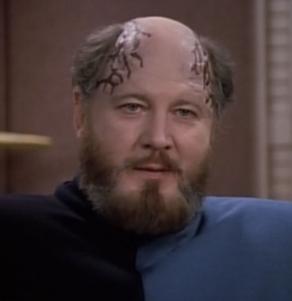 However, non-humans may have a different reason entirely for appearing to us to be overweight/obese.

Consider: food replication devices can create healthy foods easily. Part of the current obesity problem in America is "convenient" food often is not healthy. We know that the majority (if not all) food intake is monitored in the ST universe (see @Izkata's answer) so it's not far fetched to have that keyed to everyone's medical profile. If you have access to any type of food instantly AND a sophisticated computer, it should be relatively easy to duplicate healthy foods which are also tasty, which would likely lead to a great reduction in obesity.

Harcourt Fenton Mudd is large bellied. So is Cyrano Jones. Kirk's been harangued by McCoy over his diet.

In by any other name, McCoy quips about a kelvin's eating by observing he'll need a diet:

KIRK: But then Tomar shouldn't be enjoying the taste of his food.
SPOCK: Yes. Quite correct, Captain. But they have taken human form and are therefore having human reaction.
MCCOY: If he keeps reacting like that, he's going to need a diet.

So there are overweight folk (Jones, Mudd), and an awareness of overeating.

To add to the other answers, in the TNG era, replicators seem to default to artificial sweeteners (at least for things that ordinarily contain unreasonable amounts of sugar), though they can be overridden:

TROI: Transfer the letters from my mother to the viewscreen. And, computer, I would like a real chocolate sundae.
COMPUTER: Define real in context, please.
TROI: Real. Not one of your perfectly synthesised, ingeniously enhanced imitations. I would like real chocolate ice cream, real whipped cream
COMPUTER: This unit is programmed to provide sources of acceptable nutritional value. Your request does not fall within current guidelines. Please indicate whether you wish to override the specified programme?
Star Trek: The Next Generation Episode 3x08 "The Price"

Not the answer you're looking for? Browse other questions tagged star-trek biology or ask your own question.

50
Was There Ever an Official or Canon Retcon or Explanation For the Eugenics Wars?
14
What Did David Gerrold Leave "Star Trek: The Next Generation" To Work On?
21
Does Star Trek ever allude to Sulu's sexual orientation?
17
Was LCARS derived from an open-source codebase?
4
Is there an in-universe explanation for Star Trek-era designs paralleling 20th century fashions?
7
When and what was the first Star Trek scene ever filmed?
26
What is the strongest profanity used in a Star Trek show?
6
Does using Ripper in Star Trek Discovery violate the prime directive?