Children/Teen mystery novel about a detective

I read a book when I was young about a male main character (I vaguely remember his name to be something similar to Maria, or starts with M, might be wrong) who arrives at some sort of hotel at a seaside and explores it to investigate some sort of super natural things going on inside. There was also a character who was called a Captain.

The book art gave a bit of a Gothic cartoon vibe, featuring a drawing of the main character with the building behind I think. The book is in English.

I believe this is also part of a series, as I remember reading more than one book about this character. I read this book around ~7 to 10 years ago when I was still a young kid, borrowed it from a local library.

This is The Midas Box by G. P. Taylor. It is book one of three that follow Mariah Mundi.

Fresh out of school, young Mariah faces a new chapter of his life living in the Prince Regent hotel, built into the rock face of a cliff side. His job is to assist the magician in the stage shows held for the guests. Above ground, the guests are offered every form of luxury. Below ground, in the slimy, green-dripping walls of the basements, is where the magic show equipment is kept - and lurking in an Egyptian sarcophagus amongst scuttling sea-creatures is a secret that draws Mariah into the path of villainy, plots and possible death. 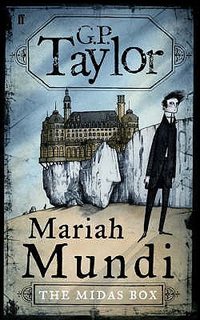 This review covers the plot much more in depth and mentions Captain Charity (only the beginning of the synopsis included):

Mariah Mundi, a colonial school boy who has lost his parents, has received an invite to work at The Prince Regent Hotel. On his train ride to the hotel, he meets Albion. Albion gives him a deck of cards and tells him to tell no one that he has received these cards. Also on his train ride he meets Isambard Black and Captain Charity.

There was a movie made based on this book (but apparently diverges significantly): The Curse of the Midas Box

Gothic mystery for children makes me think of John Bellairs and the series he spawned, and The House Where Nobody Lived is set in a house built by a sea captain in Michigan, although I don't know that it's by a seaside (there is a case of someone sailing off in a magically enlarged sailboat, but that may have been more mystical). Also, as a later book, this one may not have been illustrated by Edward Gorey.

Lewis Barnavelt and his best friend, Rose Rita, have stumbled upon the strangest-looking house. It doesn't look anything like other houses in their hometown of New Zebedee, Michigan, and the oddest things happen whenever they go near it! At first they hear a persistent drumming, the kind of spooky sound that creeps into your bones and keeps you up at night. And then there are the ghosts that Lewis sees surrounding the house...ghosts of long-dead warriors. What is the story behind this house?

Not the answer you're looking for? Browse other questions tagged story-identification young-adult urban-fantasy or ask your own question.

10
What science fiction novel was about a murder mystery, involving androids, psychics, and auras?
4
What is this story I'm trying to remember, set in an alternate black and white dimension?
9
Young adult fantasy trilogy with a large symbol and coloured background
10
Short story from anthology (1960s-1970s) about astronaut in a zoo on a future Earth
11
SF novel about crashed pilot