Has J.K. Rowling or Disney/Marvel commented on the name “Wakanda” being used in “Harry Potter and the Deathly Hallows”?

In Harry Potter and the Deathly Hallows, Chapter 13: The Muggle-Born Registration Commission 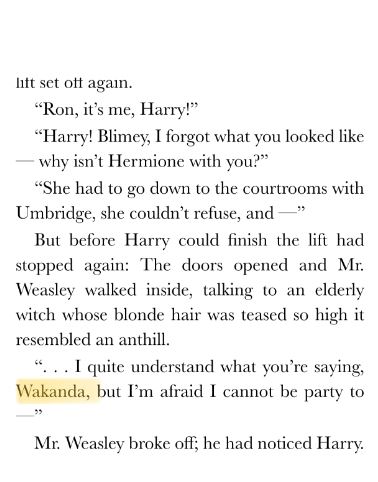 "....I quite understand what you are saying Wakanda, but I'm afraid I cannot be party to - "

Now that Marvel's Black Panther and the country name Wakanda has entered more broadly into pop-culture, has anyone from J.K. Rowling's side or Disney/Marvel commented on the use of the word "Wakanda" in Harry Potter?

No, they haven't. And they likely won't.

While yes, you are correct about the primary association between the word "Wakanda" and Marvel comics, even a preliminary google search defaults entirely to the Black Panther reference - this is not the origin of the word, and therefore, does not belong to Marvel or Rowling as any form of Individual Property.

This phrase isn't exactly common, but that is because it is actually derived from Native American language - an uncommon language - specifically the Sioux dialect. (emphasis mine)

In the Lakota way of life, Wakan Tanka (Standard Lakota Orthography: Wakȟáŋ Tȟáŋka) is the term for "the sacred" or "the divine". This is usually translated as "The Great Spirit".

This would explain why the word is used for both the location in the Marvel Comics, as it is the pinnacle of power in Africa. Additionally, it would likely explain why Rowling also chose the name (though perhaps to use it in a less specific manner):

The name Wakanda means "inner magical power" in Sioux. In Sioux tradition, Wakanda or Wakan Tanka is also a term for that which is sacred or divine.

There are also other places where this word is used to name other things, such as software, for example.

I would dare say (though I have no evidence of this) that the Wakandans in the Marvel Universe were derived from the people of the same name in the novel "The Man-Eater", by Edgar Rice Burroughs similar to how Thor is taken from Viking myth, and how Jekyll and Hyde were the inspiration for the Hulk.

Not the answer you're looking for? Browse other questions tagged harry-potter black-panther-2018 or ask your own question.

32
Does Butterbeer Contain Alcohol?
0
Why Do Purebloods Call Muggle-Borns 'Mudbloods'?
3
How did the Stupefied Yaxley manage to get up to the Ministry lobby so quickly?
10
What is the name of these creatures in Harry Potter and the Deathly Hallows?
10
If the size of a Patronus doesn't influence its power, why was Umbridge's Patronus less effective?
42
Why did Ron suddenly redevelop a fear of saying Voldemort's name in The Deathly Hallows?
8
What are the known memories used to conjure Patronuses?