Will Superman have his powers while holding kryptonite and being near the sun?

Assuming Superman is near the Sun, which gives him his immense power, what would happen if he was holding a small rock of Kryptonite in his hand?

Would the effects of Kryptonite cancel out due to power he gets from the sun's radiation?

The current explanation of the effects of Kryptonite is it drives out the energy stored in a Kryptonian's cells, weakening them greatly. It replaces the energy with Kryptonite radiation. If this happens long enough, the victim can die.

Kryptonian characters have been shown to become immune to the effects of green kryptonite due to either long-term absorption of sunlight (1) or extremely high short-term exposure to the sun(2).

The effects mentioned occurred in Kingdom Come(1) and All-Star Superman(2), both of which which have a nebulous place in current continuity, so the effect may not be standard, or canon.

The effects of Kryptonite are usually temporary, with possible mental issues causing mood changes and hallucinations lasting for some time afterwards (as explained in issues of Supergirl)

Superman utilizes energy from the sun at the cellular level. Kryptonite interferes with this process, but the method by which this happens is left ambiguous. The radiation from green kryptonite might interfere with and overpower the solar radiation providing Superman with his powers. Kryptonite could simply interrupt some organic process within his body the way that a plant’s photosynthetic process could be blocked. Or, if Superman functions like a solar panel, then the radiation from kryptonite displaces electrons in Superman’s cells, preventing the movement of the electrons to create energy flow (Wilson).

This depends on the amount of Kryptonite in proportion to sunlight exposure. I would theorize that, while in the sun and being hit from afar by a Kryptonite beam, or even holding a small [possible no more than 5 inch x 5 inch, flat or barely a few centimeters thick] piece of green K, while possibly being painful, the radiation is going to have no significant affect; Superman's cells would be reabsorbing the pure radiation faster than the Kryptonite could drive it out.

Evidence of this is given in the 2006 Superman Returns film; Superman literally had a roughly one-inch piece of kryptonite lodged in his back from a pure Kryptonite blade Lex Luthor had stabbed him with. This was after his powers were weakened by exposure to an impure Kryptonite LANDMASS the size of a large island or state. For visual reference, this is a shot of one side of said landmass against a helicopter. 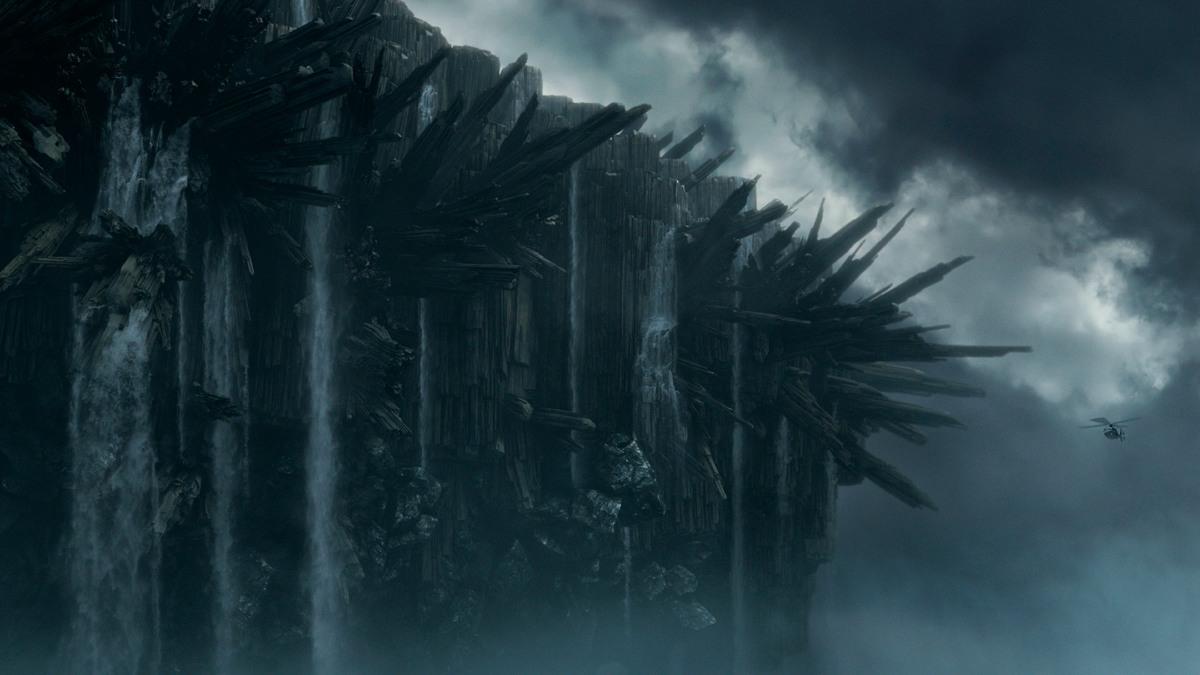 Superman flew into the upper atmosphere [evidenced, due to the wind which was blowing while there], stayed in direct sunlight for no more than 30 seconds.... 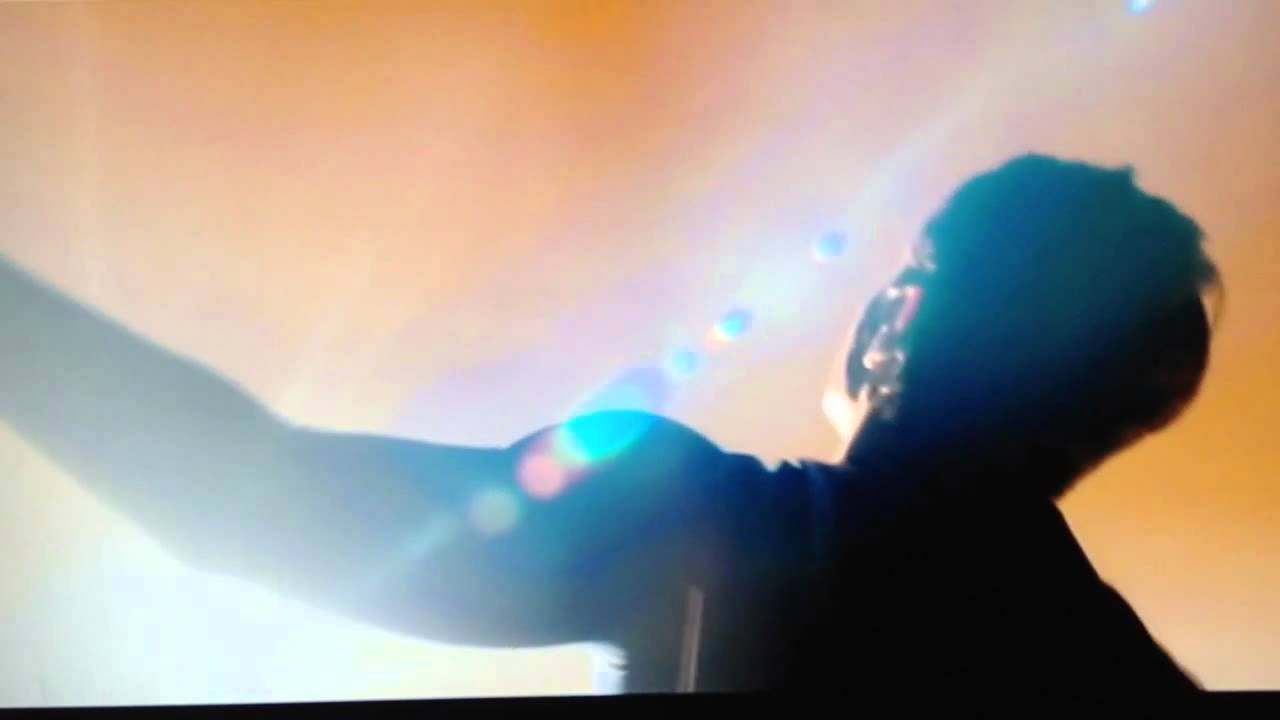 And was able to fly below the land mass, drill through it with his heat vision and physical punches to sever the tendrils from the earth, then lift and fly it out into space, ....all while showing only a certain amount of strain. 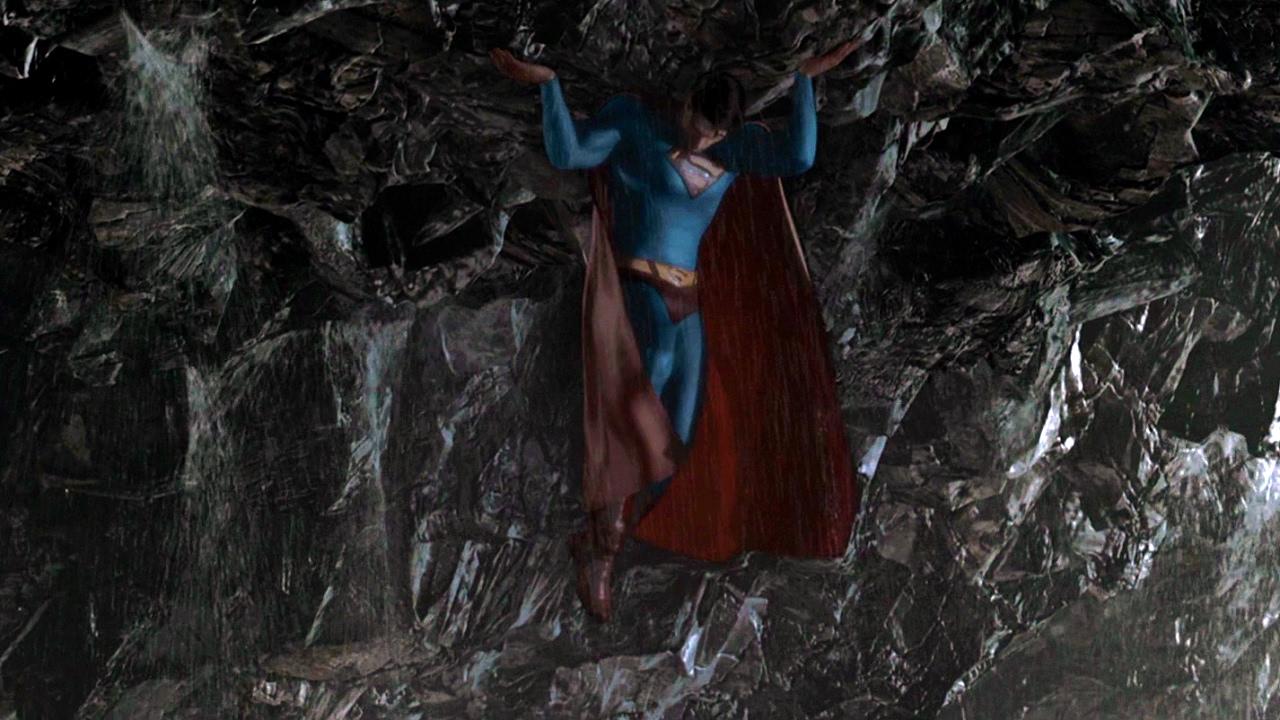 Keep in mind, again that this is a land mass comprised of the one element that can weaken and kill him .... and Superman pushes it---- and the millions of gallons of water coming off of it---- into space. So he not only had enough power to shoulder the land mass....but enough to push it out of the earth's gravitational pull and toss it miles into the void. He then fell back to earth, survived re-entry, made a crater, and was unconscious for a day or so.

Oh, it should also be noted that while he was doing this feat, not only was he being exposed to still-growing Kryptonite from the island itself , seen here.... 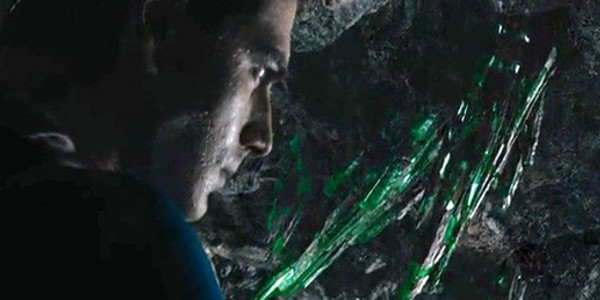 But he also had the aforementioned inch of pure Kryptonite* snapped off from the dagger still inside his back. Ere go, that Kryptonite was **still poisoning him while he was exerting himself to that level....and this was how strong he was after a.... lets be generous and say 30 second solar recharge.

This shows something pivotal: The extent to which Kryptonite can effectively counteract the solar energy in his cells is somewhat proportional to both the AMOUNT of Kryptonite, its PROXIMITY to him, and HIS proximity to the sun.

If Superman was capable of utilizing his powers to that extent while being exposed to green K externally and internally, then it should be safe to say that if he was closer to the sun directly and absorbing its radiation constantly, then the effects of the Kryptonite would be at least mitigated, if not not almost wholly dampened. This isn't to say he wouldn't experience some effects, such as pain and limited vulnerability, but if it works by "pushing the solar radiation out of his cells" and his body is being constantly inundated with fresh solar radiation, it wouldn't be in enough amount to completely poison him. Also, we have to add to this that the closer Superman is to the sun, the more solar radiation he absorbs, and being within the sun for less than half an hour allows him to draw enough strength to effortlessly move planets; in this way, if we are to assume all his abilities are heightened, so too would be his healing factor.

Now mind you, this film wouldn't be applicable as "canon" to all aspects of Superman's solar metabolism, but it does give us some parameters for answering your question in a feasible way.

Not the answer you're looking for? Browse other questions tagged dc superman kryptonite or ask your own question.

11
What actually happens to Superman when he is exposed to kryptonite?

24
What is Superman's "normal" lifespan under the effects of a yellow sun?
5
Does Superman have super powers outside of our solar system?
12
How come the Green kryptonite didn't kill baby Clark on the way to Smallville?
3
Are Kryptonians affected by Kryptonite if Earth's sun turns red?
1
Why not make "supermen" on Krypton?
2
Is there a single canon explanation for Superman's strengths and weakness?
4
Have any Superman stories dealt with his weakness to red solar energy through redshifting?
46
What does Superman do with his regular clothes after changing in the phone booth?
8
Even with his powers, doesn't Superman train and work out?