I'm looking for a Fiction book about pyramids

I read this book a very long time ago (30+ years) all I remember for sure is Giza and Cheops pyramids were important points, they emitted some sort of energy. The end of the book was calamitous. The world as it was at the time was destroyed, the pyramids survived and 2 humans were created, named Adam and Eve.
If I remember correctly a husband and wife team wrote the book.

This is Siva! by Leigh & Walt Richmond 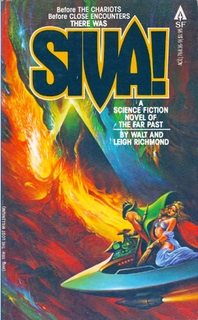 This power supported a high tech civilisation with flying cars known as carapets (flying carpets, geddit!) and they were launching space craft to explore the solar system when it all went wrong and the ionosphere exploded.

Earthquakes and a big flood ensued and some people in a Space Ark guided the primitive descendants for a long time.

At one point they took two abandoned youngsters on board (Their names were Adam and Eve) and educated them in a greenhouse hold (garden) on which plants were safe to eat. Eve got pregnant and the attendants joked about her swallowing an apple seed. The two were eventually sent back to the planet's stormy surface.

A science Fiction novel of the far past. In 1962 Walt Richmond developed his theory of the Solar tap. It makes a lot of anomalies of the past fall into place. He has written an Esssef book about it and you as reader may decide whether the story approaches the actual beginning of our civilization...

The Piri Reis maps: ancient cartographs that show Earth as seen from polar orbit - they have recently been confirmed by satellite photography.

Myriad proofs that Earth has changed its axial tilt during near-historical times: perhaps as recently as 1450 B.C.

In 1962 Walt Richmond developed the theory of the "solar tap": a source of electrical power so great that one installation could provide the world's power. In 1963 his research papers were labeled "Top Secret." The Richmonds refused to work under conditions of secrecy, but Walt worked out on his own the ideal structure for a solar tap.

The Result: an exact replica of the Great Pyramid. The kind of power postulated by the Richmonds' findings makes all the anomalies of history fall into place. This book was written as science fiction. Whether the story approaches the actual beginning of our civilization is something for each reader to decide for himself...

There is an extensive review of the book under it's original title, The Lost Millenium here.

It has been suggested as an answer for another question here.

19
Seva, the fictional Greek Goddess of Destruction, in a pre-1955 book
5
Book with lasers on pyramids for electricity generation, sun flare ending the civilization, genetic engineering of pets and rebirth of civilization