Was Ian McDiarmid’s face modified when playing Sidious in the prequels?

This is a follow-up to: Was it a spoiler that Palpatine was Darth Sidious?

In the prequel trilogy, Sidious is supposed to be disfigured by the dark side, even before the fight with Mace Windu, while he wears a magical mask when posing as Palpatine.

Looking at freeze frames from Episode I, it’s difficult to tell whether there is any modification besides the lighting (Sidious is lighted from below) and hologram distortions. 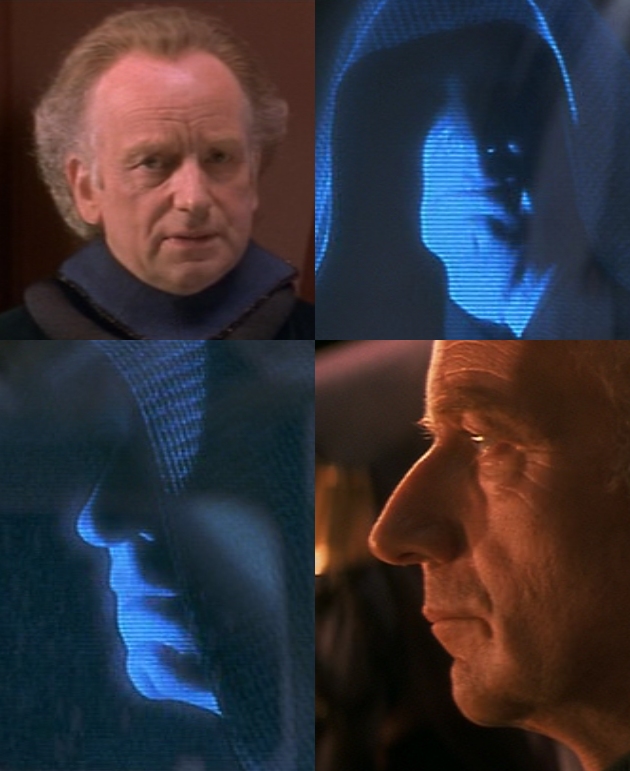 Is it known to what extent Ian McDiarmid’s face was modified for playing Sidious (or Palpatine)? For example, did he wear prosthetics or heavy make-up or was there any CGI modification?

Mind that the scope of this question is before the duel with Mace Windu. Afterwards, the answer is pretty clear.

This question does not necessarily have an unambiguous answer, because of the way Ian McDiarmid's makeup varies from scene to scene.

However, some aspects of the question can be dealt with straightforwardly. In some clips, such as this one,

we get a reasonably clear view of Darth Sidious's skin, at least on part of his lower face. There are no prosthetics; the texture of the actor's skin is clearly unmodified.

On the other hand, the skin tone appears different than in the well-lit scenes in which McDiarmid appears as Senator/Chancellor Palpatine. At some level, this is undoubtedly intentional, but it is not always possible to distinguish (even in theory) differences in makeup from differences in lighting. Especially in The Phantom Menace, Sidious's scenes tend to be either in very low light, or his image is being transmitted (in translucent blue) via a video communications link. These effects serve to give him a more sinister appearance, but filming with these different lighting patterns also means using a different makeup on the actor's face.

Screen actors essentially always wear heavy makeup; it's just standard procedure for filming. Moreover, the thickness and the coloration of the makeup will often depend on how a scene is going to be lit. So when McDiarmid was being filmed as Darth Sidious, in poor lighting and with his face mostly hooded, different makeup was required to generate match the effect of the lighting (and both the real studio lighting and the in-universe lighting whose effects are supposed to be shown are relevant). So there is no unambiguous answer to the question: Was the makeup for Darth Sidious different because the character appeared in different light, or because he was supposed to look different?

In the movies, Sidious is far less disfigured before the duel vs Windu

Sidious is distinguished by prominent chin cleft, but as we could see, before the duel vs Windu, his skin (neck area) is relatively healthy and not so wrinkled. Even in his Palpatine persona he has same chin cleft in Revenge of the Sith. After the duel, skin on his neck is completely wrinkled.

This of course stands in contrast with various Disney canon comics, even with the last episode of Rebels, but they already changed lot of original Lucas ideas.

Apparently not, as you can see here:

But that was because he didn't need to. He was old enough and the hood already covered his face enough. It was only when we first saw Sidious' face for the first time in the prequel trilogy, during this scene in Revenge of the Sith that Ian needed makeup:

See my answer to this question for further information.

Not the answer you're looking for? Browse other questions tagged star-wars technology darth-sidious makeup or ask your own question.

64
Is Palpatine's identity a spoiler?
18
Was Darth Sidious already scarred and deformed to begin with?

21
Was Darth Sidious aware of Anakin prior to the Jedi picking him up?
23
Did Darth Sidious know that Anakin was the product of his Master's experiment?
2
What was Sidious' plan before the Clone Army showed up? Conquering the galaxy with the Separatists?
5
How was Commander Cody's full body being projected on Darth Sidious' office table when there was no camera?
27
Was Sidious already making the Death Star by the end of Episode III?
5
Because of the Rule of Two, is/was Sidious the strongest Sith ever?
19
Did the Rebellion know that the Emperor was the Sith Lord Darth Sidious?
4
Was the Zillo Beast's escape a significant threat to Darth Sidious and his designs?
8
Was Sidious damaged other than his face?
8
When did the name "Sidious" first appear?