Why does Luke vault across the canyon when fishing in The Last Jedi?

In Episode 8: The Last Jedi, Luke goes "fishing" on Ach-To, the island where Rey finds him at the end of Episode 7.

While Rey is following him on his daily routine, Luke takes a huge long spear and uses it to vault across the canyon to tiny ledge (prompting Rey to say "Careful!"). Then he uses the same spear to skewer a humongous fish, which he carries back to his camp (presumably for eating)

Why did he need to do the crazy vault stunt?

If the spear was capable of stabbing a fish from that height, why didn't he just skewer a fish from the original starting location, before the vault to the tiny ledge?

Presumably the really big fish won't come into the shallows and it would be almost impossible (without the Force) to balance a pole long enough to reach the deeper water from the cliff.

On the south side of the island, a narrow inlet pierced the land, its cliffs plunging down into a foamy slot of a bay. A pole leaned against the edge of the cliff, its end planted in the shallows far below. Luke grabbed the pole and used it as a lever to swing himself over the gap.

Luke landed lightly on the other side, standing on an impossibly narrow ledge, and aimed a withering look her way. He braced himself above the long drop and lifted the pole, staring down at the water. Rey edged over to the gap and peered down to where the pole’s pointed, barbed end hung over the churning water. 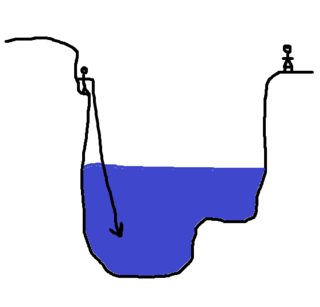 Because it looks cool and the film needed an action beat.

Unlike Yoda who acted like a crazy hermit to test Luke's compassion and patience, Luke is acting like a crazy hermit to convince her to leave. Rey is a reminder of his failures as a Jedi teacher and he wants her to GO AWAY AND LEAVE HIM ALONE so he won't hurt anyone else! This is also why he stares at her while drinking weird green sea cow milk. He's signaling "I'm a crazy, gross old man, kid. You don't want anything to do with me."

And Luke is taking unnecessary risks because he hopes he'll make a mistake and die.